From 10pm to 6:30 am, local business owner saw neither one police officer nor a single guard from Allied Security, the firm contracted to patrol the public garages.

Five of the 61 photos showing homeless 'residents' inhabiting the city's public spaces at night, some of whom are taking drugs or engaged in other anti-social behavior

August 24, 2022 - At the Santa Monica City Council meeting last night Santa Monica Police Chief Ramon Batista vigorously disputed what he called the "falsehood" that there are no police officers working at night. SMPD works "around the clock," he said and then displayed a slide showing the first names of 48 officers who he said "work at night." Another slide showed 34 officers had overtime assignments that "work most often at night, and a third slide showed 30 other officers, including command staff and Harbor Guards, who also "work at night."

Batista did not describe how many of each of the officers in the slides work at night at the same time, only that these are officers assigned night duty.

Batista's statements provoked an outraged response from some downtown business owners, including John Alle, the thorn in the side of the city council since he actively walks the garages and alleys, takes photographs, and even interviews the homeless he encounters.

"Pictures and Videos DO NOT LIE," Alle wrote in an email to Batista and copied to numerous other city officials. "Your statements last evening do not reflect the truth. Your 'agenda' and the predetermined questions from Mayor Sue and Council members Phil Brock and Gleam Davis, were an insult to the audience, those watching at home, and the thousands I have blind copied on this email."

Attached to the email were 61 photos and videos of a variety of homeless people asleep in parks, in garage elevators, on the sidewalk, and by the library where a homeless man was stabbed to death a few weeks ago. Also depicted were puddles of urine, graffiti, public use of drugs and, according to Alle, persons engaged in sex in the public garage.

The images were taken during the time span from 10 pm to 6:30 am following the City Council meeting. "I was disappointed at the lies I heard last evening, so I decided to spend most of the night camped out and moving around each of the garages and parks, as did one resident and one business owner in close proximity. We never saw an SMPD Officer on foot or anyone from Allied Universal Security at any location. Aside from addicts and drug users absorbed in their own world, the only creatures moving about were cockroaches and several noisy rats," Alle wrote. 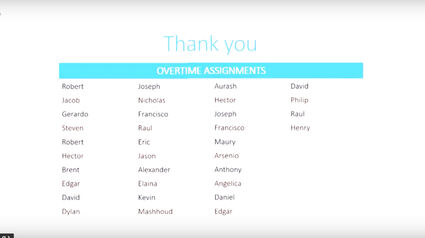 Overtime officers that "most often" work at night, according to Batista. Unknown is how many of them work at night at a time

Worse, Alle claimed that the wait time for an officer from 911 has been 45 minutes. "I even have several video clips of Safety Ambassadors waiting 45 minutes on the Promenade for your officers to respond to their 911 call at 6:45 am on a weekday. And the Promenade is only 4 blocks from your station !!!"

Alle suggested the police chief admit there is a problem with vagrancy and crime downtown and ask the more funds be allocated to his department.

SMPD has a budget for 231 officers but, according to Batista last night, has only been able to hire an additional 18 officers, to fill the 57 empty spaces on the force when he took over 10 months ago. Some of the new officers will require 18 months of training. Nevertheless, he said, "the idea that another local police department can come in and provide the same level of service, care, and compassion as the men and women of the Santa Monica Police Department is something for which I take great exception."