With Homeless Camping Allowed on Private Property, Santa Monica Has Become "Slum By the Sea" 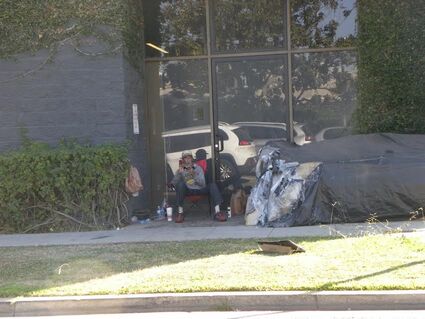 Inhabitant of 'legal' homeless tent and, yes, that is a fancy cell phone in his hands

If you shudder, as you pass the infamous, filthy, dangerous, druggie-filled "Boninville" camp under the freeway at Venice and Sepulveda, or the countless homeless vagrant encampments in Hollywood, or, indeed, that horrible homeless mess under the Pico/Centinela bridge as close as Santa Monica's eastern border with West Los Angeles, well, don't take comfort by telling yourself that that can't happen here in Santa Monica. Actually, it can, and IS already happening. And it all seems to be perfectly fine with our city leaders and police, as Santa Monica continues on its path to being The Slum By The Sea.

You see, permanent and semi-permanent encampments in Santa Monica are chased away by police, as long as they are on public property---sidewalks, beaches, parks. BUT, if they be on PRIVATE property, they are allowed. The vagrants know all about that loophole, and they exploit it to the fullest. Months ago I called about an encampment on the old used car site where the Tesla charging stations are being built on Santa Monica. Police investigated at that time and determined that since the camper was on private property, and the property owner had made no complaint, the unsightly and unhealthy camp in the heart of our city could remain.

Recently, I drove south on 17th and at Olympic, on the northwest corner, observed a vagrant with ball cap at his sidewalk home, looking very comfy. I rolled down the window, and smugly yelled out at him that this wasn't allowed in Santa Monica, and that I was going to call the police, and that he should leave before he was forcibly removed. He said nothing; just grinned at me, and flipped me the bird on both hands, that middle finger fully extended.

Turns out, he knew he held the high ground, and that's evidently why he felt emboldened enough to be impudent and obscene. Two days after calling the cops on him, I drove by and saw him still there outside his wretched, tattered, gray, worm-like, three foot high, six foot long tube structure. So I called the police again, only to learn that an officer had investigated, and had determined the camp was not illegal---since the camper had strategically placed the tube tent in an indented, three foot-wide window alcove of a commercial building, an inch from the sidewalk, but not actually ON it.

I checked Google street photos and came up with an image of what looks to be this same camper, that Google photo dated February 2022. So, he has been there at least six months, staying just inside the law and under the radar.

This is shameful. It would not occur in Newport Beach, or Manhattan Beach, or Seal Beach. So why is is allowed here? Might it just be because the political atmosphere is profoundly different, here? Is this "compassion"? Does it elevate the public image of Santa Monica, a city that used to get an awful lot of its revenue from tourists, be they local, domestic, or international, to have semi-permanent encampments, plainly visible to passersby?

Our radical left city council, particularly fanatic homeless advocates Sue Himmelrich and Gleam Davis, seem to want to destroy Santa Monica. This is an example of their toxic policies. I imagine they've instructed the city attorneys and city managers, past and present, also radical left wing, that this camper and others like it are not be pursued by law enforcement, so long as they are on private property---even if they be in plain sight. 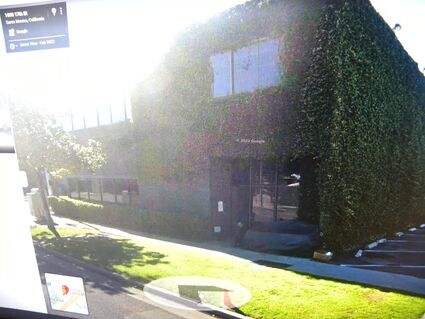 Google street image from February 2022, showing the same tent in the same place

One has to wonder about a commercial building owner, who has prominently placed a "For Lease" sign, evidently trying to attract tenants, but who seems to be fine with letting a vagrant foul his property for months on end. An investigative call must be placed to find out what the building owner has to say about this situation.

Here are photos of this abomination. The final four photos are screenshots of Google street view dated February 2022, appearing to show the very same tent and individual, proving he's been there at least six months, flying craftily under the radar, just barely skirting the law, while giving the finger to and fouling our community.

It's all so very sad, how Santa Monica, formerly described in tourist guidebooks as "sophisticated, sexy", continues on a path to the sewer, thanks to the efforts of powerful, misguided social engineers like Sue Himmelrich, Kevin McKeown, Gleam Davis and all the others past and present, who know who they are.