Pacific Park joins other landmarks across the country in displaying red, white and blue 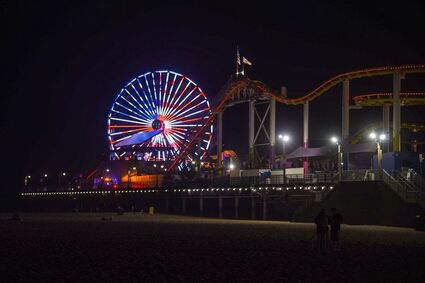 Pacific Park on the Santa Monica Pier will honor American workers with the Ferris Wheel's dazzling display of red, white and blue colors, patterns and transitions. This along with a 90-feet-tall conventional American flag.

Labor Day is a creation of the labor movement and is dedicated to the social and economic achievements of American workers. It constitutes a yearly national tribute to the contributions workers have made to the strength, prosperity, and well being of America.

Pacific Park will join other landmarks across the country in displaying red, white and blue colors in observance of the holiday for the weekend of September 2-5, 2022.

The first Labor Day holiday was celebrated on Tuesday, September 5, 1882, in New York City, in accordance with the plans of the Central Labor Union. The Central Labor Union held its second Labor Day holiday just a year later, on September 5, 1883. By 1894, 23 more states had adopted the holiday, and on June 28, 1894, President Grover Cleveland signed a law making the first Monday in September of each year a national holiday.