Manchester Police Release Video of Attack on Sikh Priest; But Blur Image of Attacker Because of Woke Nonesense

Police in Manchester have released CCTV footage showing an attack which left a Sikh priest with life-changing injuries.

Manchester Police have released video footage of a Sikh priest being brutally attacked and left for dead on the street and are asking for the public to help identify the attacker. They blurred out the attacker's appearance. 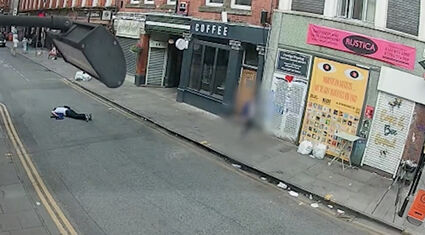 Police in Manchester have released CCTV footage showing an attack which left a Sikh priest with life-changing injuries.

Manchester Police aka @gmpolice, have issued new images of a man and a woman wanted for questioning regarding a broad daylight attack on 23rd June which left a 62-year-old Sikh man in a coma and with life-changing injuries.

A police spokesman said they actually want the public to identify 2 witnesses who are not in the video, rather than the attacker. Needless to say, Twitter responded brutally to the blurred video.

The victim is said to have brushed past the woman witness identified by police. The Sikh man was then attacked by the perpetrator, and left sprawling in the middle of the road.