"The Queen is Dead, Long Live the King". Queen Elizabeth Is Dead, as Family Surrounds Round Her at Balmoral Castle

She was the last of the world's great monarchs, and now she is gone. King Charles III Issues Statement as Commonwealth mourns. 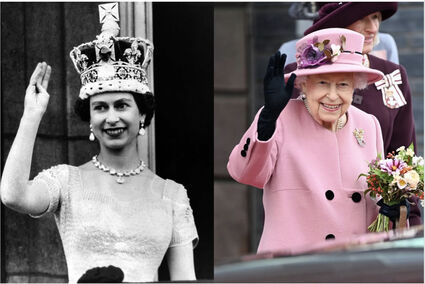 9.8.22 Queen Elizabeth II, whose seven decades on the throne of the United Kingdom was a longer reign than any other British monarch, has died at the age of 96. The queen "died peacefully" on Thursday afternoon at Balmoral Castle, her estate in the Scottish Highlands, Royal Family officials announced. She died with her entire family gathered around her.

Elizabeth II (Elizabeth Alexandra Mary; 21 April 1926 – 8 September 2022) was Queen of the United Kingdom and of 14 other sovereign countries from 6 February 1952 until her death. Her reign of 70 years and seven months is the longest of any British monarch.

Her entire family gathered around her, "including even Harry," said one Royal follower. "They made Meghan stay in London. What she's done is toxic, and as with any other family, no one wants a trouble maker around at a time like this."

"She's lived by example, she gave her life for her country, she never wavered. In the past 2 years, she lost her husband and her best friend."

She had to tell Andrew he was done from his royal duties, because of his connection to Jeffrey Epstein. And then on top of all that, all the drama with Harry and Meghan. She's had a really rough time."

"The Queen kept old fashioned dignity and poise. Something this world lacks. I remember wearing little uniforms with pride as a child. The strength of being a royalist is far deeper. Charles must be scared; he's never had that type of responsibility. He's not that popular. Third in line to the throne William is popular, as is his lovely wife."

She's the last of the greats. She's like Victoria, or Queen Elizabeth I. She sacrificed her entire life for her country. Change isn't always good. The royals are born into this life, and they want it all. Diana wanted to cavort with pop stars. Meghan Markle wants her Netflix deals. The new generation, they just don't understand. You can't do drugs in Vegas and have people take photos of you naked (like Harry). You can't act like that and also be a royal." 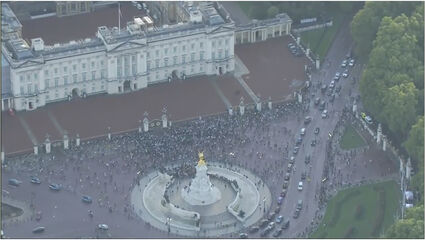 Crowds outside Buckingham Palace in London

"She was living history. And now she's gone."

Charles, the new king of Great Britain and the Commonweath, released his first statement regarding Queen Elizabeth II's death.

"The death of my beloved Mother, Her Majesty The Queen, is a moment of the greatest sadness for me and all members of my family," he wrote.

"We mourn profoundly the passing of a cherised Sovereign and a much-loved Mother. I know her loss will be deeply felt throughout the country, the Realms and the Commonwealth, and by the countless people around the world."

"During this period of mourning and change, my family and I will be comforted and sustained by our knowledge of the respect and deep affection in which The Queen was so widely held."