City wants to end the Covid measure on September 30th, but the Restaurants want an extension to February 28th, 2023

Mary Beth McDade from KTLA listens to an employee of 1212 restaurant, explaining the importance of outdoor dining.

Santa Monica wants to eliminate outdoor dining on September 30th, on the Promenade. 1212 Restaurant on the Third Street Promenade says that it will lose 70% or more of its business, if the City takes away the outdoor dining.

The space increase was allowed during the Covid pandemic's early days in 2020, when it seemed much more likely that diners could avoid the virus if they sat outside. Lucian, the CEO of the restaurant's "Global Dining" corporation, says that the restaurant now grosses $800,000 to $1 million per month. "In 2019, without the outdoor dining, we were grossing around $300,000 per month," he says. He adds that as a result of the increased business, the company employs about 60 more people, all of whom would be let go without the outdoor dining.

Real estate agent Barbara Tenzer, a member of Downtown SM, says that prior to the expansion of 1212's dining space, which now occupies the entire space between the spitting dinosaur fountain and the building facade,

Tenzer says the SMFD's objection to the use of the outdoor space, is that a fire hydrant can't be accessed through the outdoor dining space. "But it's just not true," she says. "They can simply ask the diners to get up and move." 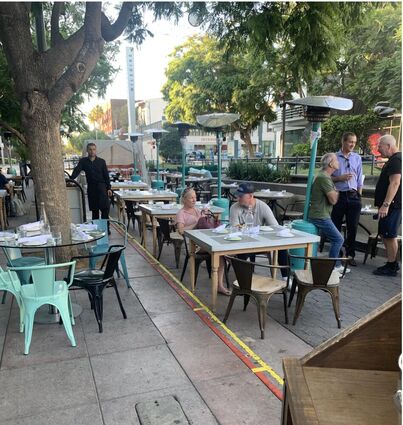 Tenzer says that traditionally, restaurants would pay the City of Santa Monica round $3.50 per foot for the privilege of using City outdoor spaces as seating. "We're ready, willing and able to pay that now," she says. During the pandemic, the City did not charge for the outdoor dining spaces, she says.

Tenzer adds that the homeless problem has abated on the Promenade where there is outdoor dining present. "The restauranteurs won't tolerate the homeless in their spaces. Before 1212 expanded into this space, homeless people would congregate here," she says, motioning to the space near the spitting dinosaur fountain. "There were three private groups feeding them. Now, they're gone," Tenzer adds.