Debate Wednesday night was watched by 100,000 people in Los Angeles. Who won the first face off? 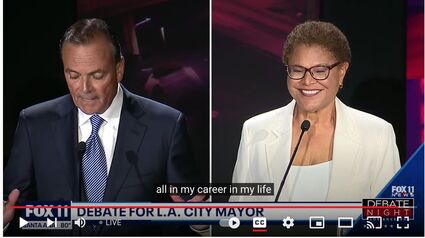 Bass and Caruso debated at the Skirball center Wednesday night.

Candidates for mayor of the nation's second largest city faced off for the first time at the Skirball Center Wednesday night. In a move right from the LA Times Playbook, the reporter for the Times reminded real estate developer Rick Caruso that he had been registered as a Republican. Which is incredibly insulting, but that's the LA Times.

Congresswoman Karen Bass tried to imply that just like her, Caruso had been involved in some sort of corruption. "Most corruption in City government involves developers," she explained. "I have not ever been involved in any scandal in my entire career," retorted Caruso. Bass is herself involved in a corruption scandal involving an honorary degree she received from USC.

Bass said the solution to crime and homelessness is to spend more money. It costs $1,000,000 for the City of LA to house just one homeless person. "Where exactly do you plan to find this money?" asked Caruso. Bass just smiled.

Reviews on Twitter were of course mixed. "Los Angeles: Rick Caruso may be endorsed by big stars like Katy Perry and a few others, but he is anti-abortion! Vote Karen Bass for mayor. We can't slip up at this point." tweeted Lib Tard

"Instead of plans or goals, she simply attacks Caruso - Our parents told us about people like Karen Bass-Vote Caruso" Tweeted Joe Blow 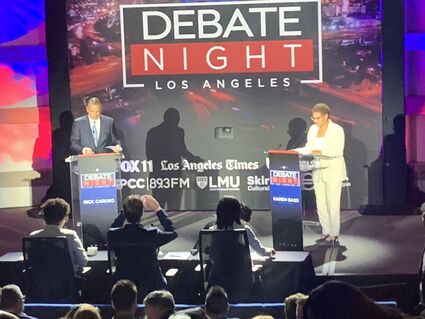 "AVHQ debate analysis: Caruso was was good, but misstepped in questioning Bass on her home burglary. It was too petty. Bass was surprisingly good too. Hopefully sky will not fall if she wins. Our pick stays with Caruso. Hard NO on Luna. We will take the pitbull over the lapdog." tweeted Culver City Anti-Vagrant.

The candidates for mayor will face off two more times before the election. Bass, an experienced politician, is the choice of the political establishment. Caruso is an upstart who has never held political office, but offers a fresh perspective on problems such as crime and homelessness.