This generation of Iranians have had it with the Mullahs and their restrictive religious views. Change is in the air, and this time it's different 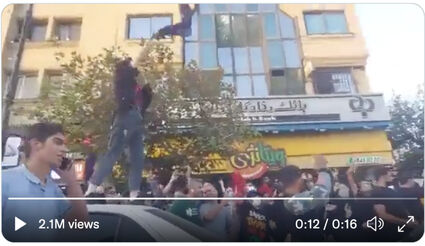 A woman standing on a car, wearing western clothes, takes off her hijab and waves it in defiance at #Iran's religious police

Protestors in Iran appear to have taken control of the streets of Teheran, and also of other major cities. In Mashhad, the birthplace of Supreme. Leader Khameni, street protestors have burned Khameni's statue.

Political theorists speak of achieving a revolutionary mass of people who want regime change. Iran appears to be at the precipice of a revolution, unexpectedly.

The protests began after a 22 year old young woman, Masha Amini, died in police custody. She was arrested for allowing her hair to show on the street, a violation of the extreme version of Shia Islam propounded by Iran's leaders.

"Unbelievable scenes from #Tehran!" tweeted Ahmad Quaraisha. "A woman standing on a car, wearing western clothes, takes off her hijab and waves it in defiance at #Iran's religious police. #MahsaAmini #IranProtests2022"

This generation of Iranians who were born after the 1979 Iranian revolution, have never warmed up to Iran's theocracy. Iranian Revolutionary Guard Corps sponsor terrorism, says the US and other countries. Constant conflicts with the West and with Israel do not seem to justify forcing them to live under a sanctions regime imposed by the West in retaliation.

The protestors are showing incredible bravery. Iran's religious police have killed or raped political prisoners for decades. Occasional rounds of protests have been squelched by the ironically named Islamic Revolutionary guards. But this times, it's different.

"Burning of #Iran Supreme Leader Khamenei's statue in his own hometown of Mashhad as protestors chant "death death to Khamenei. Protests in Day 7 with anger directed at top of regime." 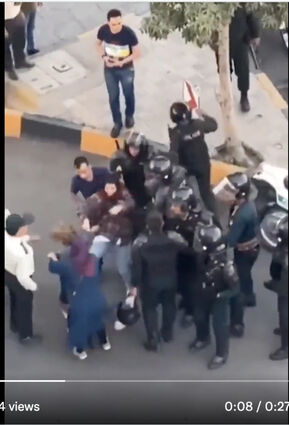 The protests are worldwide. "Iranian diaspora have gathered in central Stockholm chanting: “This is the last message, our target is the entire regime”.

Foreigners have also joined us to show their solidarity with people in #Iran. #IranRevolution #OpIran", tweeted Nioh Berg.

The death of a 22-year-old Kurdish woman who fell into a coma after being arrested in Tehran for wearing an “improper" hijab has sparked multiple protests across Iran. Rejecting allegations of mistreatment, Iranian authorities claim Mahsa Amini suffered from pre-existing conditions. The protests have spread across at least 15 cities, leaving multiple people dead and prompting partial internet cuts as outrage continues over the government’s dress code and veiling laws, Al Jazeera and Reuters report.