In February, Pres. Biden Threatened to Destroy the Nordstream2 Pipeline if Russia Invaded Ukraine. Now Some Wonder if US Blew It Up 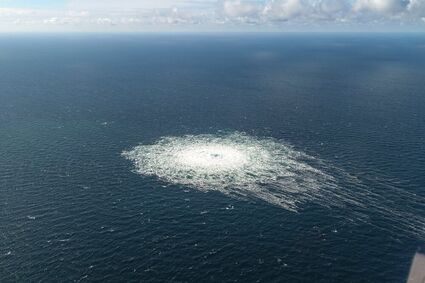 Rising oil and gas from damaged Nordstream II Pipeline, in the Baltic sea near Southern Finland

Now that the Nordstream2 pipeline brining natural gas to Germany has been disabled. Gas is leaking into the Baltic Sea, near the terminus in Russia's St. Petersburg region. Some think the US caused the disruption to the pipeline. They point to a February 27th 2022 press conference, where US President Joe Biden answered a question as follows:

Reporter: "But how will you do that, exactly, since...the project is in Germany's control?"

Biden: "I promise you, we will be able to do that."

Among other places the video may be seen at http://abcn.ws/3B5SScx

Reaction on Twitter was swift. "Biden would not cause an environmental disaster to disable the pipeline. Additionally, his strategy is diplomacy first," tweeted HanaJ

"There is literally ZERO benefit for the USA to commit environmental damage. If we wanted to hit Russia hard, we would bomb Russia and not be vague about it. USA likes fireworks, always bomb loudly with a display." tweeted Lisa Harar.

Biden is known for his gaffes and inexact use of language. Germany and the rest of Europe, are facing a severe shortage of oil and gas this winter with Russian gas and oil sanctioned and in short supply.

Nord Stream 2 (Russian: Северный поток — 2) is a 1,234-kilometre-long (767 mi) natural gas pipeline from Russia to Germany running through the Baltic Sea, financed by Gazprom and several European energy companies. It was started in 2011 to expand the Nord Stream line and double annual capacity to 110 billion cubic metres (3.9 trillion cubic feet). It was completed in September 2021, but has not yet entered service.

Planning and construction of the pipeline was mired in political controversy over fears that Russia would use it for geopolitical advantage with Europe and Ukraine. 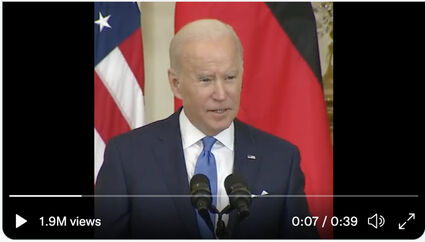 President Biden threatening to blow up Nordstream II in February

German Chancellor Olaf Scholz, who had supported the project, suspended its certification on 22 February 2022, following official recognition of the Donetsk People's Republic and Luhansk People's Republic by the Russian State Duma and President Putin during the prelude to the 2022 Russian invasion of Ukraine.

On 26 September 2022, the NS 2 pipeline ruptured. Unexplained large pressure drops were reported in both NS1 and NS2 pipelines at their end-station in Germany. Shortly after, gas leaks from the two pipelines were discovered within the Danish and Swedish economic zones. Berliner Zeitung newspaper has asked if it is sabotage.