The Ukraine Army is on the Verge of Encircling 3,000 Russian Soldiers in #Lyman, Donbas Region

Could this be the beginning of the end for the invading Russian Army in Ukraine? It sure looks that way. Battle of the Bulge 2.0! 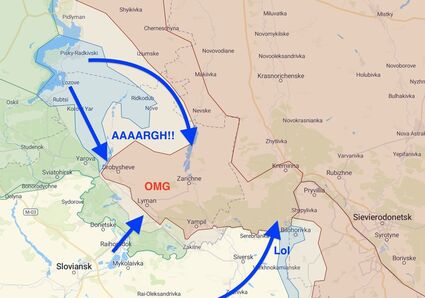 9.29.22: "A Russian collapse in the Lyman-Yampil sector is almost imminent now," tweeted Illia Ponomarenko. "The pocket is about to be closed off if this is not the case yet. Russians need to leave before it’s too late, but now it would be hard as Ukraine can target their withdrawal route."

"Truthful information isn't being communicated up the command chain and spread along the line, i.e. the field officers are lying to HQ about the real risks at Lyman, so they may be unaware that being cut off is a real possibility," tweeted Hideki Nishida. "Front line troops aren't told overall battlefield conditions, so when a defeat happens it's a surprise that severely affects morale. Also they're unprepared to react to the defeat and make tactical adjustments to prevent another Izyum where the whole front collapsed due to panic."

The #Ukrainian military continues to advance north of the city of #Lyman in the #Donetsk region. According to @TheStudyofWar, #Ukraine "seeks to encircle #Russian forces in Lyman from the northwest." This is a serious situation for the Russian Army. If so many men were effectively taken captive, trapped in a pocket by advancing Ukrainians, it would completely demoralize the 200,000 or so Russian personnel in Ukraine. The front line could collapse, and Russia could find itself defeated.

"Russians panicking & trying to leave #Lyman by any means possible. Looks as though #Ukraine bottled them in and then cooked them up as they tried to run, sometimes in stolen civilian vehicles." said one Ukraine army source Wednesday afternoon.

"The Ukrainian army has liberated Zelena Dolyna and Kolodyazi and is about to encircle the Russian-held city of #Lyman. There are unconfirmed reports, Russia started withdrawing from Lyman as a consequence. The last road out (towards Kreminna) is contested." tweeted another battlefield source.

"The only chance for #Russians to avoid being captured is to retreat down the road via Zarichne towards Kreminna, although it is also a risky move. Battles are already taking place for the control of Kolodyazi, few miles from Zariche. #Lyman " tweeted Marcus Lychna. 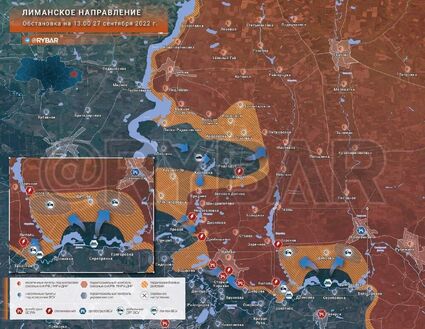 Map of the area around Lyman, where 30,000 Russian fighters could be surrounded.

Lyman is an important railway center. 44,000 residents lived there prior to Russia's invasion 7 months ago. A few thousand residents also remain there. Lyman is on high ground, hence in that way it's more defensible.

In 1944, the Germans had one last chance to encircle an American and British army with 150,000 men, with their remaining 300,000 men. The battle of the Bulge was an allied victory. Afterwards, the German army was crushed and dispirited; Hitler's fall was swift and certain.

Why show a map that's illegible?