Elon Musk Proposes a Russia Ukraine Peace Plan on Twitter. Needless to Say, He's Getting a Lot of Hatred on Twitter

The 4 point peace plan actually has over 1 million up votes on Twitter; but it has also garnered a lot of negative comments 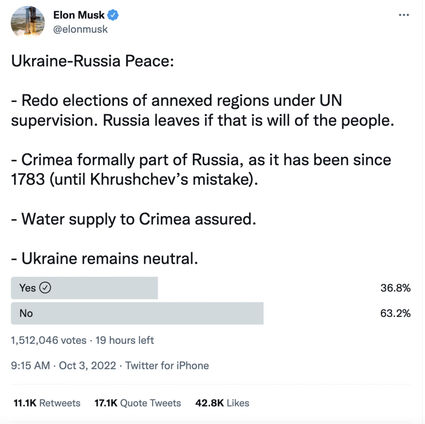 Blessed are the peacemakers, for they shall be loathed on Twitter. Elon Musk posted a peace plan on Twitter, and boy do people hate him for it. The 4 point peace plan invites people to vote yes or no. The proposal has 1.5 million votes, about 2/3rds of which oppose the plan.

The peace plan says : 1. Ukraine-Russia Peace: 1- Redo elections of annexed regions under UN supervision. Russia leaves if that is will of the people. 2- Crimea formally part of Russia, as it has been since 1783 (until Khrushchev’s mistake). 3- Water supply to Crimea assured. 4- Ukraine remains neutral.

"People - Elon Musk simply said something stupid on Twitter regarding a thing he has very little idea about," tweeted Illia Ponomarenko, a reporter for the Kyiv Independent. "A failed shitposting attempt deserves getting ridiculed into oblivion, but there's no point making an enemy out of him now."

It is believed that Vladimir Putin was offered the same 4 point plan prior to launching Russia's February 24th, 2022 invasion of Ukraine.