It's the only way to get to Crimea from Russia, other than passing through Ukraine. How was this special operation carried out? 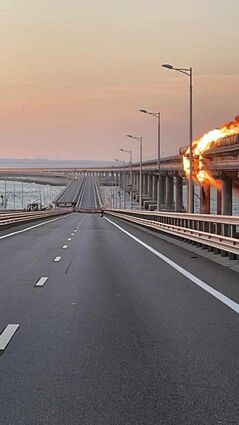 Update, 10/8/22: The Russian proxy governor of Crimea announced late Saturday, that vehicle traffic across the bridge had resumed. The claim is unverified, but there are 2 undamaged lanes, so it is possible.

Early Saturday morning, the Ukraine military hit the Kerch Bridge with a missile strike or other explosion that took out a span of the bridge. This is the only direct connection (i.e. not through Ukraine or occupied territories) between Russia and Ukraine.

Russian media initially said a fuel tanker exploded on the bridge. Russian authorities in Crimea later said the explosion was a truck bomb; which doesn't explain why both a train and one lane of the highway were involved. Russian authorities called it a terrorist act, adding that the shipping arches were not damaged. So ship traffic was not interrupted, they said.

"Bridges are pretty common targets in war. This one has strategic and symbolic importance for the Russians, as it connects Russia to Crimea. Ukraine has made no secret of its ambitions to retake Crimea. It was a necessary measure to hit the bridge, though Ukraine has not claimed credit for the bridge." said Scott Kelly, a CNN expert, noting that a train 30 km within Russia, was also hit this evening as it travelled to Donetsk.

Kyiv Independent: Vladimir Konstantinov, the head of Crimea's Russian-installed illegal "parliament", claimed that the damage was "insignificant", and the bridge would be repaired soon. The statement contradicts videos and photos on social media that show significant damage. Ukrainian media reported an explosion at the Crimea Bridge, which links the Russian-occupied peninsula with Russia via the Kerch Strait, at around 6 a.m. on Oct. 8.

The Ukraine Military had previously refrained from hitting the Kerch Bridge, one of the world's longest suspension spans. It's a natural target, but had been thought to have been outside of Ukraine's operational range.

"It is too early to ascertain the method of attack and the range of implications of this attack on the Kerch Bridge. It is certainly a punch in the face for Putin on his birthday," tweeted Mick Ryan, a retired Australian Lt. General and military commentator. Friday was also the Russian president's 70th birthday.

"This isn’t one explosion. Both (separate) lanes of the road bridge seem to have collapsed AND the railway was stuck in the same vicinity while there was a train on it. This is stellar work. There will be a movie about whoever did this," tweeted Dave Horry. 'This is going to go down as one of the most well executed spec ops missions in history."

There was speculation that a train had been carrying the explosives, since a train was seen to be present in many of the photos. 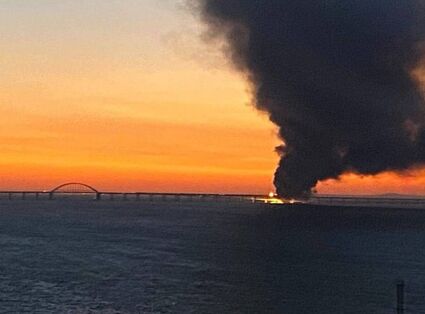 The Kerch Bridge was said to be on fire as the sun set over the black sea on Friday, October 7th.

Wikipedia: The Crimean Bridge (Russian: Крымский мост, tr. Krymskiy most, IPA: [ˈkrɨmskʲij most]), also called Kerch Strait Bridge or Kerch Bridge, is a pair of now partly destroyed parallel bridges, one road, one rail, spanning the Kerch Strait between the Taman Peninsula of Krasnodar Krai in Russia and the Kerch Peninsula of Crimea in Ukraine. The bridge was built by Russia after it annexed Crimea at the start of the Russo-Ukrainian War. It has a length of 19 km (12 mi), making it the longest bridge Russia has ever built, and the longest bridge in Europe. Besides transportation, Russia intended the bridge to support its claims to Crimea. https://en.wikipedia.org/wiki/Crimean_Bridge