How to do the least damage in Soviet Monica: Our recommendations or endorsements in local races.

October 20, 2022 - Mail-in ballots have arrived in mail boxes and voting centers are open starting October 29. How can you cast your ballot in a way that will benefit the community, bringing health, security, and prosperity to all? Or, in the case of Soviet Monica, do the least damage possible? Here are our recommendations.

Bullet vote for two; there is no third candidate we can recommend:

Melkonians is the anti-overdevelopment advocate who prevented the huge Papermate project on Olympic Boulevard by garnering massive public support. He's effective, and he wants what's right for Santa Monica.

Negrete was appointed to the city council last year and has proved herself an advocate of common sense solutions to Santa Monica's crime, homelessness, and housing problems.

Santa Monica ballot measures are, as usual, grasps for money and power by people who already have too much of both. Our recommendation is NO on all with an abstention on DTS, which attempts to ameliorate the damage should DT pass.

NO - We're already in trouble attracting tourists with our crime and vagrants.

MEASURE PB to expand eligibility for serving on Personnel Board

NO - We already have too many non-residents making decisions for us.

NO - This is a horrible, revenue-choking, property-theft measure sponsored by outgoing Mayor Sue Himmelrich, who can't be gone soon enough, the funds of which she intends to spend on her own useless pet projects together with her buddies on the "oversight" committee. There is no sunset for this egregious tax.

NO - Santa Monica has a spending problem, not a funding problem. City staff and elected leaders could not account for $6 million in spending on homelessness, for example - money that obviously did not accomplish very much.

MEASURE DTS to allocate monies raised by DT to rent relief, homelessness and other vital services

NO - It's a bad precedent to create special taxes on certain businesses. Picking and choosing winners and losers in the marketplace is a good way to lose control of your economy. 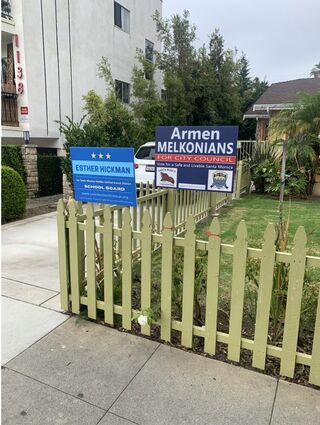 Santa Monica residents get into the election spirit

MEASURE RC to change requirements for owner-occupancy of rent-controlled units, reduce Annual General Adjustments, and not require elections for Rent Control Board

NO - Landlords have been unable to collect rent or evict tenants for almost three years. They don't need more financial distress.

NO - There could be a declared state of emergency for all kinds of reasons that would not necessitate reducing rent. Proven unnecessary and subject to abuse.

Measure SMC to issue another bond for Santa Monica College

NO - The college asks for bonds whenever they think they can get a 'yes' vote. This money will go to unnecessary frills and to house nonresident students.