Hockey greats Luc Robitaille and Wayne Gretzky both played hockey in this parking lot. But game's over, says the parking company 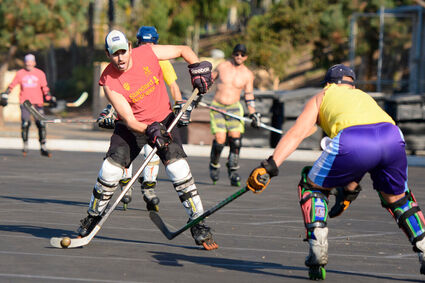 Left Josh Geller with the ball prepares to take a shot on goal as right Marek Skosnik misses with the poke check at a Santa Monica Beach parking lot on Sunday October 16th 2022. The City of Santa Monica has been receiving heat from the parking company that runs the lot so last Friday October 14th 2022 a code enforcement team from SMPD made an attempt to shut the game down. Hockey has been played here for close to 30 years with out any problems.

Since the earlier 90's when Wayne Gretzky became a Los Angeles King's hockey player, roller hockey games have taken place at the beach parking lot south of the Santa Monica Pier. Not once has there ever been a problem.

Now the company that runs the lot wants the players out claiming that they are taking away parking spaces. City enforcement is not the issue, and neither are drivers. Players report that when parking spaces are occupied either due to filming, a warm day, or a holiday the hockey players go to another spot or do not play. Tourist from around the world often take photos of the games too. 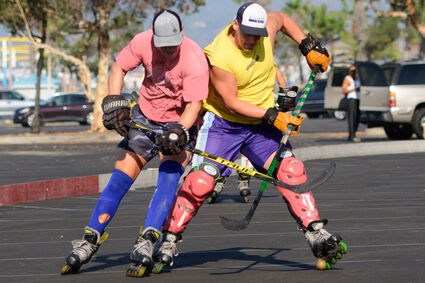 Left Pavel Skalinik locks up sticks with right Marek Skosnik as they both battle each other for control of the hockey ball at a Santa Monica Beach parking lot on Sunday October 16th 2022. The City of Santa Monica has been receiving heat from the parking company that runs the lot so last Friday October 14th 2022 a code enforcement team from SMPD made an attempt to shut the game down. Hockey has been played down here for close to 30 years with out any problems

Needless to say, the players are not happy with the new parking lot policy. "Complete joke," said Mike Rubman. "Been down there since 96. Playing hockey at the beach has become a tradition, we're not out there hurting anyone not causing harm. Perhaps they should worry about the crime and homelessness instead of busting our balls."

"We've kept such good relations with the police and the public for over three decades that I'm very surprised by this," said Richard Lee. "Even if cars or bikers or skateboarders came flying through our game we never retaliated (or cooler heads kept people from retaliating). Have any incidents occurred where people were yelled at or threatened or intimidated? Can anyone think of a particular reason why this might be occurring now?"

"We're here keeping to ourselves, and we are quite respectful to our neighbors and guests," said Mike Ricketsen There is far more stuff going on around here that needs attending to."

"I think it's unfair and disruptive," said Anthony Brown. "I have been down since I was a kid in the 90's. I made so many friends, learned so many lessons, so many memorable experiences. I feel there are bigger fish to fry. We good stewards we take care of the parking lot as we clean it. If someone gets injured it's on us and we take ourselves to the hospital."

We have reached out to Central Parking, the company with the contract to operate the parking lot, for comment.

I’ve been wishing this would happen for 20 years. The hockey players are not kind and gentle as they claim. They make a single mom feel threatened if I choose ti park in “their” lot. Grateful to parking company for doing what the police refused to do.

Well reported Morgan. This, if something, will help.