With 330 million users, the vast majority of tweets are written by a minority of users. 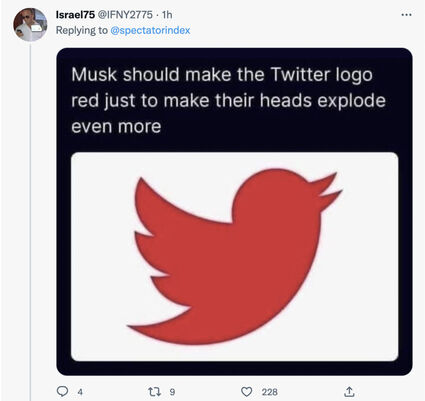 Meme saying Musk will change the bluebird to red.

Seeking new ways to monetize the platform, Twitter CEO and new owner Elon Musk says that the blue check marks will now cost $20 per month, or $240 a year. This according to the website TheVerge.com.

"Employees working on the project were told on Sunday (by Musk indirectly), that they need to meet a deadline of November 7th to launch the feature or they will be fired," says the Verge.

Websites on the right of the political spectrum say that the blue check verifications are difficult, even impossible for them to get. Twitter has recently stated they would be more even handed in assigning the check marks. 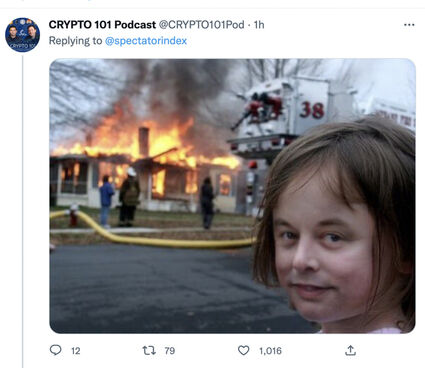 Elon Musk as "Disaster Girl" in another meme.

Twitter is a microblogging and social networking service owned by American company Twitter, Inc., on which users post and interact with messages known as "tweets". Registered users can post, like, and retweet tweets, while unregistered users only have a limited ability to read public tweets. Users interact with Twitter through browser or mobile frontend software, or programmatically via its APIs. Prior to April 2020, services were accessible via SMS. Tweets were originally restricted to 140 characters, but the limit was doubled to 280 for non-CJK languages in November 2017. Audio and video tweets remain limited to 140 seconds for most accounts, says Wikipedia

Twitter was created by Jack Dorsey, Noah Glass, Biz Stone, and Evan Williams in March 2006 and launched in July of that year. Twitter, Inc. is based in San Francisco, California and has more than 25 offices around the world. By 2012, more than 100 million users posted 340 million tweets a day,[11] and the service handled an average of 1.6 billion search queries per day. In 2013, it was one of the ten most-visited websites and has been described as "the SMS of the Internet".

By the start of 2019, Twitter had more than 330 million monthly active users. In practice, the vast majority of tweets are written by a minority of users.