One man suffered a gunshot wound to the arm; shooting occurred at the Union 76 gas Station, may have been a car to car shooting. 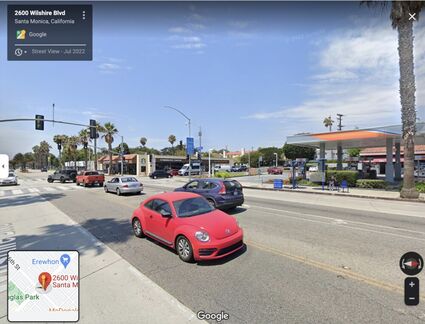 Union 76 gasoline station at the corner of 26th Street and Wilshire Blvd. was the site of a car to car shooting late Monday.

A shooting Sunday night at the intersection of Wilshire Blvd and 26th Street in Santa Monica, wounded one man. He suffered a gunshot wound to the arm. This is breaking news; details are lacking at this time. The shooting occurred near the Union 76 Gasoline station.

The Los Angeles Police Department later got a call for a shooting and Wilshire and Bundy, less than half a mile away. This indicates that it may have been a car to car shooting, since the location of the shooting moved west on Wilshire Blvd half a mile.

Last night, two homeless men shot out the window of a 7-11 on Lincoln Blvd, after the clerk refused to sell them beer. The perpetrators were arrested in that unrelated incident.

This is the direct result of soft on crime leftist politicians and policies. Think before you vote.....