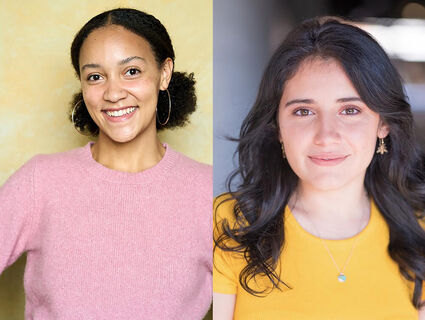 Courtesy of The Open Fist Productions

Set at the end of the 19th century in the small town of Gray, Indiana, The Wizard of Oz meets Our Town in Leonard's powerful and poignant "children's story for adults." Following the death of her father, 15-year-old June prays for a "healer" so no one in town will ever have to suffer again. When a man literally blows into town in a hot air balloon, she thinks her prayer has been answered. At first, the new doctor cures anything and everything. But soon his presence leads to a clash between faith and science.

"It's an allegory," explains Leonard. "A young girl struggles to overcome loss and fear. In the end, she figures out that she's her own heroine."

"The play deals with themes of love and loss, but it's very, very funny and imaginative," says Open Fist artistic director Martha Demson. "It's a delightful production that packs an underlying punch."

The Open Fist production stars Erica Mae McNeal and Rebekah Paugam alternating in the role of June. Other double-cast parts include Martha Demson and Alina Phelan as June's mother, Rebekah; Jeremy Guskin and David Shofner as Dr. Galen P. Gray; and Beth Robbins and Debba Rofheart as Maggie, owner of the local tavern. Portraying the other townspeople are Alexander Wells as Pastor Phineas Wingfield and Lane Allison as his sister, Tiny; Rosie Byrne and James Fowler as Belva and Crutch Collins; and Alex Hogy as Homer, a local teen who pines after June.

Anatomy of Gray was originally staged at Circle Repertory Theatre in New York, and has subsequently been staged at American Conservatory Theatre in San Francisco, and at A Contemporary Theatre in Seattle. Leonard is currently adapting it into a musical with composers and lyricists Beth Thornley and Robert Cairns, with whom he collaborated on the musical Bad Apples.

Jim Leonard has published eight plays, including The Diviners, And They Dance Real Slow in Jackson, and Battle Hymn. Theatrical honors include the Outer Critics Circle Award, an Ovation Award, the Dramatists Guild Award, and an LA Weekly Award for best play.

Open Fist Theatre Company is a collective, self-producing artistic enterprise with all facets of its operation run by its artist members. The company's name combines the notion that an open spirit, embracing all people and all ideas, is essential, with the idea that determination, signified by a fist, is necessary if the theater is to remain a vital voice for social change and awareness.

Anatomy of Gray runs November 19, 2022 through January 21, 2023, with performances taking place on Fridays and Saturdays at 8 p.m. and Sundays at 3 p.m. (dark Friday, Nov. 25 and December 18 through January 6). General admission to all performances is $30, with $20 tickets available to seniors and $15 tickets available to students with valid ID. Appropriate for ages 10 and up.

Atwater Village Theatre is located at 3269 Casitas Ave in Los Angeles, CA 90039. Parking is free is in the ATX (Atwater Crossing) parking lot one block south of the theater.