Federal Authorities Charge David Depape in Attack on Paul Pelosi, And Attempt to Kidnap Speaker of the House Nancy Pelosi

Depape was homeless, a drug addict, and an immigrant from Canada who had over-stayed his student Visa by more than ten years. 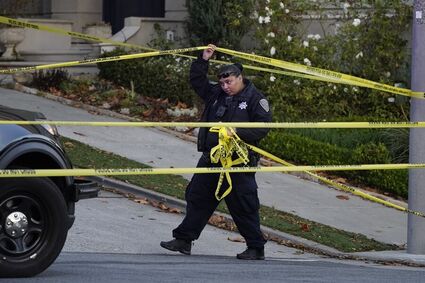 A California resident was charged today with assault and attempted kidnapping in violation of federal law in connection with the break-in at the residence of Nancy and Paul Pelosi in San Francisco on Friday morning at 2 am, announced the US Attorney's Office for the Northern District of California.

On the date of the attack, Depape was homeless, an illegal immigrant from Canada, and addicted to drugs. Yet he is being called a radicalized Republican by the mainstream media, because he appears to have had plans to tie up Nancy Pelosi "and break her knees" with the two hammers he brought.

Depape has been accused of abusing his children and step daughter, according to the New York Post. He lived in a commune style existence for the last 12 years, with a common law wife at times. He did post about Q-Anon, and made scatological references to Harvey Weinstein, says the Post. But he also was a registered Green Party voter, a guy who experimented with drugs, and someone who lived a non-conventional lifestyle.

According to the complaint, David Wayne DePape, 42, of Richmond, was arrested on Friday inside the Pelosi residence by San Francisco Police Department (SFPD) police officers responding to a 911 call from Paul Pelosi, husband of U.S. House of Representatives Speaker Nancy Pelosi. Paul Pelosi later described to police that he had been asleep when DePape, whom he had never seen before, entered his bedroom looking for Nancy Pelosi. 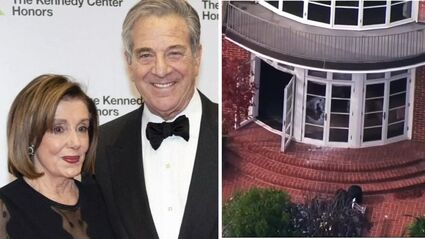 Paul and Nancy Pelosi; broken glass smashed by David Depape in order to gain entry to the Pelosi residence.

According to the complaint, minutes after the 911 call, two police officers responded to the Pelosi residence where they encountered Paul Pelosi and DePape struggling over a hammer. Officers told the men to drop the hammer, and DePape allegedly gained control of the hammer and swung it, striking Pelosi in the head. Officers immediately restrained DePape, while Pelosi appeared to be unconscious on the ground. As set forth in the complaint, once DePape was restrained, officers secured a roll of tape, white rope, a second hammer, a pair of rubber and cloth gloves, and zip ties from the crime scene, where officers also observed a broken glass door to the back porch.

I support Jimmy Kimmel and Mr. Pelosi Secret homosexual SanFran lifestyle and it’s their own business who they sleep with when they get lonely and drunk. These are very powerful and sexy closet men so they can do who ever and what ever they want ! They have my FULL support . You go guys ! Stay in those closets me Amigo’s !! it’s non of the publics dame business who u bed down with when your wives are away not giving you the company that you deserve. Also, I don’t blame you, if I was married to your wives I would be doing the same thing, but a hell of a lot more often lol Stay strong and thanks again Jimmy for sticking up for your secret bestie from that horrible Elon Musketeer fellow. Bros b4 Ho’s right fellows ? Lol We’ll keep doing what you Gentleman do and I’m so happy Mr. Pelosi is going to make a full recovery ! Thank God for that ! Well I GOTA go get me some of my own you now what gentleman wink wink !! TTYL

Please everyone, come back up from your rabbit holes. It pains me to read these comments. Whatever you want to believe, you can find support online, right or left. I just kindly ask to use critical thinking to assess all that's out there. There are many websites that debunk of lot of these claims. Please if you believe that the MSM is misleading all those dumb left, then who is misleading the gullible right? Anyone who has worked in a newsroom (or any sort of business) can see that it's impossible for all these different media outlets to be in on it together. Please take a step back and think for yourself.

All the bad stuff regarding DePape's lifestyle fit in with a lot of MAGAts... druggies, abusers, etc. Even illegal aliens. Trumpers are NOT real conservatives but this guy was definitely a #cult45 member.

the police report that they found the two men fighting, and mr depape hammering mr pelosi.... All fine so far. But how, or who, exactly alerted the police in the first place?? The ploice (again) report that mr pelosi himself alerted the police. They say mr depape granted to mr pelosi a washroombreak, where mr pelosi called the police using a coded language.... If mr depape is, or was, indeed, the violent stranger breaking into this old guy's home in the middle of night -- then, here's the big questinon: Why would mr depape would allow mr pelosi to go to washroom at all ??? Can somebody answer, or explain this blantant nonsense, please!

Anyone else see a problem with large amount of broken glass on the OUTSIDE of the door?? Nothing to see here folks..keep moving, keep moving along.

None of the facts as presented so far make any sense. There is a cover up going on. There was a third person present because neither of these two could open the front door while supposedly struggling over a hammer... Pelosi's homes get 24 hour secret service protection. There are cameras all around the property....police have body cameras. Nothing being released. Supposedly Paul is well known in SF gay bars.

This is as true as Jussie Smollett. This does not pass the smell test. We can't trust anything the FBI says.