Santa Monica High Went on Lockdown After Bomb Threat. Same Google Phone Used to Dial in Bomb Threats Across US

Authorities Swept the campus after a bomb threat was received, says the principal's office. Nothing was Found and Students Were Safely Released. 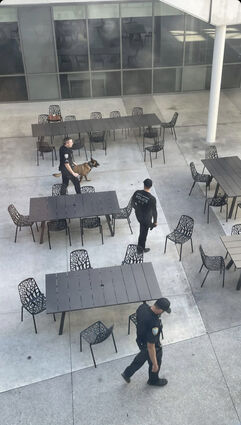 Santa Monica High School went on lockdown on Thursday just after noon. “We are on scene, conducting a search of the school. No suspicious items have been located and there no other credible threats,” emailed Lt. Rudy Flores, SMPD Public Information Office

Authorities are sweeping the campus after a bomb threat was received at 11:42 am, says the principal's office in an email to parents Thursday afternoon. It reads:

"Dear Samohi Family, At approximately 11:42 am, the switchboard operator received a phone in bomb threat, which was set to go off within 5 minutes. The school contacted the police immediately following this phone call. The school is currently in a Shelter-In-Place, and all students are safely in classrooms." 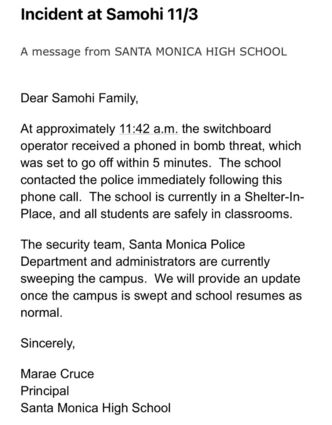 File photo of a student walking nearby the school.

"The security team, Santa Monica Police Department and administrators are currently sweeping the campus. We will provide an update once the campus is swept and school resumes as normal."

Nothing threatening having been found on campus, students were released from the lock down at 3 pm.

The same phone number used to phone in a bomb threat to SamoHi dialed 2 other schools, one in Northern California and another in New Jersey. It's unknown if there were other threats towards the schools. (Probably, one could look online for bomb threats in Northern California and New Jersey). The phone came back to a google cell phone; no data on who had access to it. From this information it looks like someone used the phone to call in school hoaxes around the country.