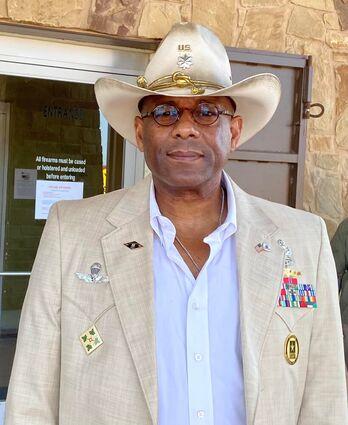 Colonel West explained that the ACRU's mission is to protect "the God-given rights outlined in the U.S. Constitution." It was created as "a counterbalance to the American Civil Liberties Union, the ACLU, which is a leftist organization." He exclaimed that when he thinks about the partnership with the Association for Mature American Citizens, he thinks about all of the great AMAC members who are also veterans. What the ACRU wants to do "is [create a synergy], because as I tell people, the oath that you took to the Constitution never ends. It has no statute of limitations."

West said that AMAC and ACRU have a joint concern, namely voter fraud focused on America's seniors. He cited an investigation in Wisconsin that found "nefarious activities that were happening at senior living facilities and memory care centers." For example, he said, it showed that residents suffering from dementia, Alzheimer's, and other such conditions were voting 100% in some facilities, despite their disabilities. They found that "people were actually going in and registering these people and then also voting for these individuals." As it turned out, the same thing was happening in other states, he noted. "For example, in Texas, we had an individual that was brought up on over 100 counts of voter fraud relating to the abuse of seniors. And that's what this really is. This is abusing our seniors, and we should not allow that to happen. So, ACRU created the Center for Vulnerable Voters [www.protectvulnerablevoters.com]."

West explained that the program provides tools and resources for relatives of residents in nursing and memory care facilities, including a senior voting rights document. "We are sending letters to facilities in the major states where you have large senior citizen populations to let them know that we're watching, we're paying attention, we're alerting people to the fact that we don't want to see the abuse of seniors anymore when it comes to our election process."

Colonel West went on to lament the state of America's military and the negative impact of the so-called "woke" movement -- a politically leftist ideology that seeks to redefine what it is to be an American. He cited a Heritage Foundation report on our nation's military readiness. "One of the things that the military is supposed to be able to do is to deal with MRCs [Major Regional Conflicts]." The Foundation found that we can't even deal with one major regional conflict. He pointed out how these days, our armed forces seem to be more interested in training our troops in the ways of woke protocols. As a result, "we have emboldened our enemies -- China, Russia, North Korea, Iran. On top of that, [the military has to deal with] the unconstitutional, unethical, illegal, and immoral vaccine mandate order that was passed down from the Commander-in-Chief. Look at how that's affecting our readiness. You're talking about getting rid of 20, 30, 40, thousand members of our military at a time when we're not able to meet our recruiting and retention goals. We had to lower our in-strength requirements because we can't meet our recruiting goals. That's not how we should have an operating military in America."

West went on to point out that it's not just the degradation of our national security or our military security. There's a lot more with which to be concerned. "You see a degradation of our energy security, we're down to 25 days of diesel supply in the U.S. We have almost cut in half our Strategic Petroleum Reserve. And think about our seniors. Not just what is happening to their savings, to their 401k accounts, and their retirement accounts. Think about the fact that now they have to make a decision about eating or heating oil because the prices are going up. But what do you hear from the Biden administration, which is going to create a windfall tax against the oil and natural gas companies? We have to go back and realize we were once energy independent. And when you are energy independent, you're economically independent. And you think of all the second and third-order effects that are hitting all Americans, but especially our vulnerable seniors out there that are being decimated." 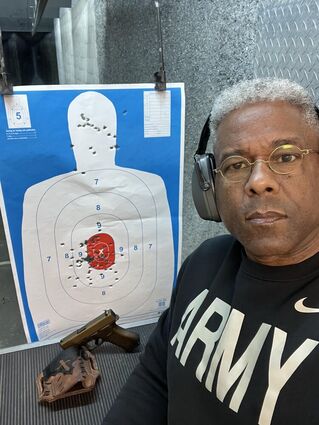 West, a proponent of the 2nd Amendment, at target practice

As West put it, "we've tried this leftism thing and it is not working." The nation wants to get back to where we were two years ago; we want to get back to our fundamentals. And as Colonel West believes, we will get back to the rule of law, the adherence to it, and the respect of individual rights, freedoms, and liberties.