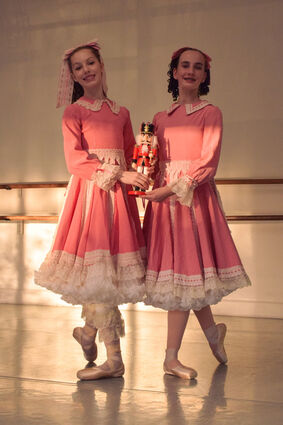 The longest-running NUTCRACKER production in SoCal returns Thanksgiving weekend to The Broad Stage in Santa Monica.

The cast of over 80 student dancers include 34 Santa Monica residents and students who will grace the stage in Westside Ballet of Santa Monica's annual Holiday production, returning for the ninth year at The Eli & Edythe Broad Stage at the Santa Monica College Performing Arts Center. This will be the nonprofit performance company's 49th Season.

Based on E.T.A. Hoffmann's "The Nutcracker and the Mouse King" and the Marius Petipa classic, this is the complete, traditional ballet.

Sophie Wilson, a ninth grader of Crossroads School for Arts and Sciences, will dance the coveted role of Clara.

"My earliest memory of watching The Nutcracker was when I was six, and I believe it was Westside's," Sophie shares. "During the party scene, I had absolutely no idea what was going on and where to look, however I was very excited to watch the Snow Queen and Arabian. Whether it was because of the costumes, choreography or the music, I was always waiting for them. We used to see the five o'clock shows, so by the time we got home it felt like a "late night" and it just felt very cozy and memorable."

Westside Ballet's version of the classic has been a Los Angeles holiday tradition since 1973. Westside's co-founder Yvonne Mounsey pioneered the role of Center Spanish while at New York City Ballet.

"The lavish performances, featuring both world-class professional dancers and pre-professional and student performers, are an ideal way to expose children to classical music and dance," says Producer and Westside Board President Judith Meister. "The holiday spirit truly leaps to life as audiences are invited to follow Clara and her Prince on a snow-dusted journey only Tchaikovsky could have composed."

SaMoHi sophomore Catia Boucher says her love of ballet began to shine through as a Polichinelle in her first Nutcracker. She later performed as Clara, and is thrilled to be performing the role of Snow Queen this year. "It will always be my favorite time of year," she expresses, smiling ear to ear.

Eleanor Smith (a SaMoHi sophomore) performs the comedic Victorian Maid, as well as several difficult corps de ballet roles such as in the mesmerizing Waltz of the Snowflakes. Another SaMoHi student, Teralani Galvan, will dance in Tchaikovsky's revered Waltz of the Flowers.

The Westside production features 85 dancers, 225 costumes, and four lavishly designed scenes that have been updated over the years with new backdrops and accouterments, but retain the most beloved traditional characters and iconic moments, including a growing tree, a firing cannon, and falling snow over a stunning corps de ballet.

Additionally, Sawyer and Dylan will perform the Sugar Plum Cavalier in the "Nutcracker Suite," which Westside performs for 1,000 elementary school students in the Santa Monica-Malibu and Los Angeles Unified School districts. The ballet will be narrated to ballet excerpts, followed by Q&A with the dancers. Performances are Nov. 30 and Dec. 2.

Westside Ballet will open its doors on Friday, Dec. 2 for a performance to local Veterans and members of many charities and organizations such as: PAL (Santa Monica Police Activities League), Taking the Reins, Neighborhood Youth Association, Allies for Every Child, Vet Tix, Venice Family Clinic, Everybody Dance!, A Place called Home, Community Corp of Santa Monica, Virginia Avenue Park, and Boys and Girls Clubs of Santa Monica and Hollywood.

Sponsors for the Nutcracker

The Nutcracker production is made possible in part by grants from the City of Santa Monica-with past grants from the Rotary Club and a LA County COVID-19 Arts Relief Fund-and from sponsorships from local Santa Monica individuals, businesses, and organizations such as Santa Monica College Public Policy Institute, The Huntley Santa Monica Beach Hotel, Lyft Scooters, Urth Caffe, Morley Builders, and more.

Under an education initiative launched in 2013, Westside's dancers who are high school students concurrently enrolled in Santa Monica College dance course 59A will receive credit for the performances. The credits are transferable to any of California's public four-year colleges and universities.

###. About Westside Ballet of Santa Monica - One of the nation's premier pre-professional ballet training companies, the nonprofit organization's mission is to give promising young dancers the performance opportunities so important to their development––as well as make dance more accessible to local children and families. Westside Ballet of Santa Monica was created by Yvonne Mounsey (New York City Ballet) and Rosemary Valaire (Royal Ballet) in 1973. Westside Alumna Martine Harley (Houston Ballet) took over as Artistic Director in 2013. Based in Santa Monica, California, the company comprises approximately 80 dancers, ages 8 to 18.

The sister entity, Westside School of Ballet, distinguishes itself as a non-audition academy where all are welcome to study ballet and train to the most refined pre-professional level. Nearly all the artistic staff are products of the school, bringing a consistent approach to classical ballet training. Ms. Mounsey and Ms. Valaire opened the school in 1967, six years before the founding of the performance company, and produced many of classical ballet's luminary performers known worldwide. 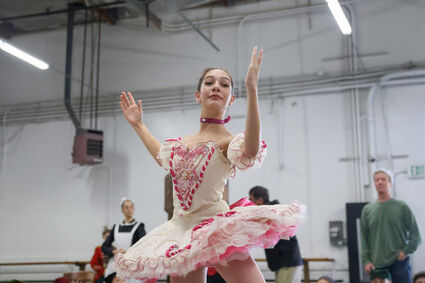