Driver, Passenger Left Hanging On the Side of A Cliff Over PCH After Car Goes Over Cliff in Santa Monica 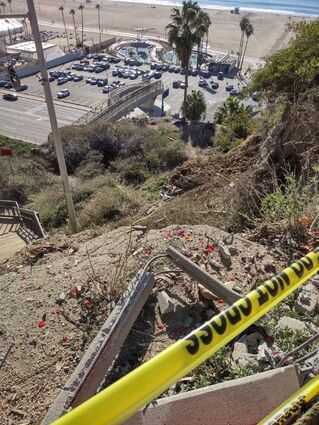 Flat area where the vehicle landed after crashing off the cliffs.

A vehicle went over the bluffs on Ocean Ave and Montana in Santa Monica Saturday morning at about 25 minutes after midnight. The accident occurred after the vehicle failed to turn left or right on Ocean Avenue, and drove straight through Palisades Park.

The car landed on a flat surface on the bluffs with 10 feet of clearance from falling down onto PCH. 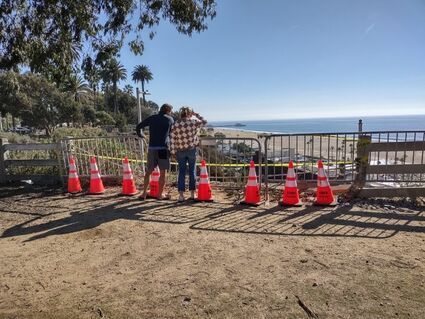 Couple looking over the crash site in Palisades Park.

Update11.25.22: "This morning at approximately 12:25 AM,  dispatch received multiple calls regarding a vehicle that drove over the bluffs at Ocean / Montana. Upon arrival, evidence showed that a vehicle had driven west on Montana Ave into Palisades Park crashing through the barrier and landing approximately 50 feet west into the bluffs.   Officers contacted two occupants who were inside the vehicle. Both sustained minor injuries and were transported to a local hospital with non-life-threatening injuries. The driver was subsequently cited for felony DUI.   A crane was requested and responded to remove the vehicle from the scene," wrote Lt Rudy Flores, SMPD PIO

Any updates on who this was? And whether they will be paying for the substantial damage they caused?

What type car was it?