Suspects had in their possession 4 catalytic converters, various saws, and cocaine. 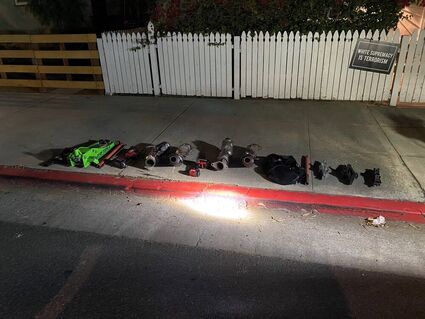 SMPD officers were called to the 2200 block of 22nd Street just after 2 am Friday morning. A caller said that a grand theft auto had just occurred. The 911 caller reported that several subjects had just removed the Catalytic Converter from his sister's 2010 Prius. The suspects fled in two automobiles: a dark blue Honda Accord and a dark green or grey Dodge Charger, writes Akulfi.

"Within minutes, officers located the cars driving in a convoy on Oak Street. Both vehicles were stopped and the subjects detained without incident. The reporting party was able to positively identify the Honda as having been involved in the commission of the theft. Inside the Honda, occupied by Jose Izguerra Duarte (age 23) of Long Beach and Michael Pedraja (age 19) of Los Angeles, officers located the following property: four catalytic converters from Prius vehicles, a Daytona jack with the handle, a Milwaukee reciprocating saw with a 6" saw blade, additional 6" saw blades, an electric impact driver, and three jack stands. In addition, officers located a replica handgun on the passenger side floorboard," she wrote.

"The lead vehicle, the Charger, was driven by subject Jasenda Argueta (age 21) of Gardena with Victor Duarte Macias (age 19) of Antioch in the passenger seat. Officers located in the vehicle a Milwaukee power tool battery and the handle to a floor jack. During a jail search, officers found in Argueta's wallet a white, powdered substance preliminarily identified as cocaine."

All four suspects were booked into the Santa Monica Jail for Grand Theft. Argueta was also booked for a Health and Safety Code violation for drug possession.