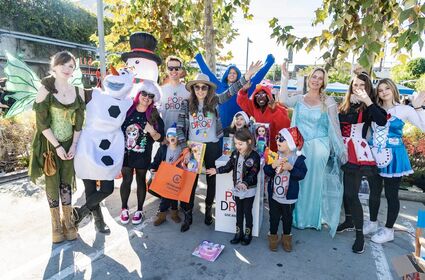 Families were given candy treats, snacks, Aquahydrate water from the characters as they danced and sang to Holiday tunes sang by Erin Gavin, Maria Madero and acclaimed rock musician Louis Metoyer, who all donated their time.

The annual event was supported by the Film & Entertainment community for the families of Children's Institute. The event is the creation of Filmtoys, which began in 2019 as a simple way to make a difference and to have a real impact on Los Angeles families via connections throughout the film and entertainment community.

Thanks to Filmtoys, Toy bins have been placed all over Hollywood thanks to the support of Filmcraft, Mattel, Jakks Pacific, (who also generously provided the costumes as well as hundreds of toys) Filmtools, Quixote Studios, Women In Media, Food & Bounty, Raleigh Studios, Production Gear Rentals & Illuminar. This year they partnered with Project Pop to expand the drive and show the world that Hollywood Cares.

Project Pop Drop was created by John David Snyder and Niki Shadrow Snyder. The philanthropic couple and their team bring food, clothing, blankets, toiletries, toys, and many lifesaving supplies to local shelters and organizations that assist people who are experiencing hunger and homelessness. The dynamic couple of Project Pop Drop received the President's Volunteer Service Award from the White House, along with a gold medal of honor for their work in 2020. They proudly call their generous community, Give-fluencers.

Remember it's not just the holiday season, our amazing charities work all year to provide for others, now that is the real Holiday Spirit!"

Children's Institute Inc. (CII) is a nonprofit organization that provides services to children and families healing from the effects of family and community violence within Los Angeles. Founded in 1906 by Minnie Barton, Los Angeles's first female probation officer, the organization (then named the Big Sister League) was first designed to help troubled young women who found themselves adrift in Los Angeles." The organization has since expanded its services to at-risk youth in Los Angeles who are affected by child abuse, neglect domestic and gang violence as well as poverty. CII is a multi-service organization that combines evidence-based clinical services, youth development programs and family support services designed to address the whole child and entire family. The organization provides various forms of trauma support-including therapy, intervention services, parenting workshops, early childcare programs and other support services offered in English, Spanish and Korean.

CII currently serves thousands of families throughout Los Angeles County at three main campuses: The Otis Booth campus in the Rampart/Westlake district; the Burton Green Campus in Torrance and the Mid-Wilshire campus near L.A.'s Koreatown. CII also operates a satellite center in Watts and San Pedro/Long Beach. The organization's therapeutic focus is based on the concepts of Recovery, Resilience and Readiness and seeks to help youth build confidence and discover and develop skills to break through barriers-both emotional and situational-to grow up and lead healthy, productive lives.

Learn more at http://www.childrensinstitute.org and see how you can join in to support their next much needed charity event