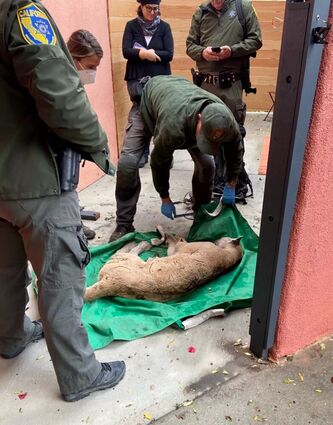 UPDATE December 12, 2022 - The mountain lion known as P-22 has been safely captured according to the National Park Service and SaveLA Cougars. Beth Pratt, Regional Director of the National Wildlife Federation, thanked NPS and California Department of Fish and Wildlife for bringing P-22 in safely for a health evaluation. As well, Pratt wrote that, "Our hearts go out to the pets and people that in P-22's distress have been impacted. We acknowledge that these interactions are traumatic for the individuals involved and their lived experiences should not be minimized."

December 9, 2022 - A mountain lion designated P-22 who has been living in Griffith Park for over ten years is going to be captured and brought in for a "health evaluation" after a series of attacks the male cougar has made on area pets and people. Below is a letter from Bett Pratt, regional director of the National Wildlife Federation and backer of a wildlife corridor to be constructed over the 101 Freeway.

P-22 has always been in an unprecedented situation. Never has a mountain lion lived in such an urban setting in one of the world's most populated cities. He is also a remarkably old mountain lion, living well past the normal life expectancy of his kind, and may now be exhibiting signs of distress. Although he has always been impacted by the isolation the freeways caused him, as P-22 has aged, the challenges associated with living on an island of habitat seem to be increasing and the scientists are noting a recent change in his behavior.

Today, the California Department of Fish and Wildlife (CDFW) and the National Park Service (NPS), announced their plans to capture P-22 and bring him in for a health evaluation. Following that evaluation CDFW and NPS veterinarians will determine next steps for him while also prioritizing the safety of the surrounding communities. The people involved in his capture and evaluation are some of the top wildlife biologists in the world who have studied P-22 and other mountain lions for decades. We trust them to make a good decision.

CDFW and NPS do not require assistance to capture and evaluate P-22 and ask that members of the public refrain from any involvement in the effort.

Sadly, what we are seeing with P-22 again underscores the unfortunate consequences of a lack of connectivity for mountain lions and all wildlife. He has lived for over a decade in the smallest known home range ever recorded for a male mountain lion. If Griffith Park was connected to other open space, P-22 would have options. P-22 might not be now traveling so close to the denser human-wildlife interface. He likely would not have lived this long if he didn't reside on an urban island, as he probably would have been displaced by a younger male mountain lion seeking territory as is more typical.

P-22 has given us so much. He is a beloved wild mountain lion that survived against all odds, and his plight of being trapped in Griffith Park after making a perilous journey across two of the busiest freeways in the country showed the world how harmful our roadways can be to mountain lions and all wildlife. He captured the imagination of people around the globe, and his story inspired the building of the world's largest urban wildlife crossing outside of Los Angeles so that other area mountain lions don't suffer his same fate.

We must now give back to P-22. We must recognize when the limits of this unconnected space have been reached, and take action to ensure the well-being of P-22 and the community he lives in. 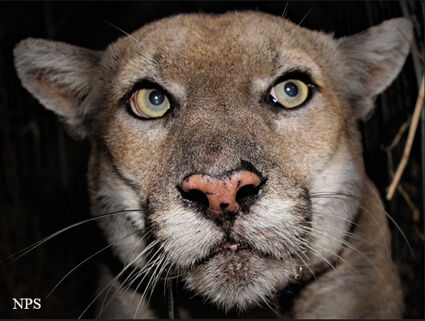 Once a decision is made for the best option for P-22, the National Wildlife Federation is committed to providing any necessary funding needed to ensure P-22 has the best care he needs.

We also have P-22's back. Once a decision is made for the best option for P-22, the National Wildlife Federation is committed to providing any necessary funding needed to ensure P-22 has the best care he needs.

This is an emotional time for many. It's an emotional time for me. P-22 transformed my life, and the lives of so many others. He has been an inspiration and will continue to be. I want what is best for P-22 and I know we all share that goal. It's a difficult decision but the right one. He can't change his circumstances because we humans did not create a safe and connected world for wildlife with our deadly freeways. But we have the ability to help him. We owe him another option in this next phase of his life. And to honor his legacy we owe all wildlife more crossings so another P-22 doesn't happen.