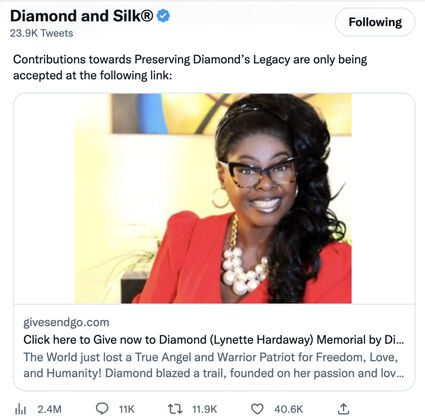 Conservative commentator "Diamond" of Diamond and Silk fame suddenly died on Monday, according to the duo's official twitter account. A page on Givesandgo.com, has raised over $17,500, to be given to Lynette Hardaway's family. The page says:

"The World just lost a True Angel and Warrior Patriot for Freedom, Love, and Humanity! Diamond blazed a trail, founded on her passion and love for the entire race of humanity. The memory of her passing should forever remain in our hearts. In this time of grief, please respect the privacy of Diamond’s family but remember and celebrate the gift that she gave us all!"

On January 9, 2023, Former President Trump announced on Truth Social that Diamond had died at her home in North Carolina. While he stated that, "probably her big and precious heart just plain gave out", her official cause of death was not immediately made clear. She had taken an absence from their program with an unspecified illness in November 2022 before briefly returning in December.

Ineitha Lynnette Hardaway and Herneitha Rochelle Hardaway Richardson, two sisters known as Diamond and Silk, were a pair of American conservative political commentators and vloggers. The two were prominently known for their support of Donald Trump, and served as contributors for conservative news channel Newsmax.