During Monday's Rainstorm, Melrose Avenue Was So Heavily Flooded That It Is Impassable in Places

Los Angeles Experiences Its Heaviest Rainstorm in Ten Years. Drivers are being advised to avoid the roadways, due to the risk of hydroplaning 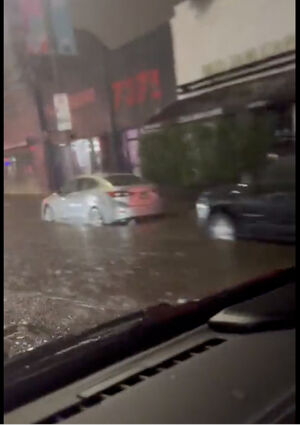 Report: Melrose Avenue is So Heavily Flooded That It Is Undriveable

1.9.23: During a brief break in the rain Monday night, Los Angeles drivers reported that some streets near Melrose and Fairfax Avenue in Mid Wilshire, were impassable due to flooding. 3 inches of rain has fallen on LA in the last 24 hours. Local residents also pointed out on social media, that the drainage system is 100 years old in some places near DTLA.

"It's not the weather that's life threatening actually, it's the poor drainage systems here. I'm from the east and there are powerful, lengthy storms, but water doesn't usually pool up on the streets at the first drop. I'm so amazed at all the water here from a small rain," tweeted Lisa. 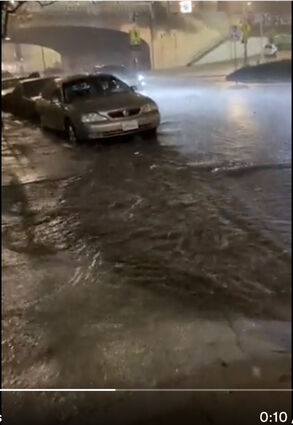 Report: Melrose Avenue is So Heavily Flooded That It Is Undriveable

In Chatsworth, two people were rescued from a car that fell into a sinkhole. They had to rescue the pair, who suffered minor injuries, using a rope suspended from a ladder. The ground was otherwise too unstable for rescuers.

There is a flash flood advisory in the foothill communities, such as Duarte. Montecito's 10,000 residents have reportedly been evacuated. There is also a high surf advisory. Drivers are being advised to avoid the roadways, due to the risk of hydroplaning (when the tires lose contact with the roadway and float over the asphalt).

Los Angeles tonight is experiencing its heaviest rainfall in ten years. Video of one driver on Melrose may be seen at: