"At 3 AM Monday morning they drove a CAR into the front door of Louis Vuitton and stole a lot of merchandise," 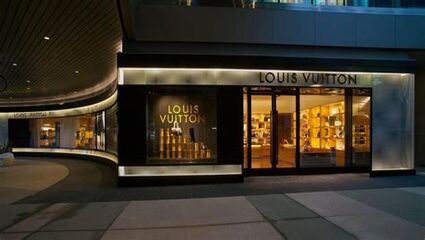 Smash and grab robbers apparently drove an automobile in Santa Monica place early Monday morning, 1.9.23. They got away with various high end merchandise.

"On Monday, January 9, 2023 at about 3:15 AM," wrote Lt. Rudy Flores, "SMPD Dispatch received a call from Santa Monica Place Mall Security who advised of a burglary alarm activation at Louis Vuitton (110 Santa Monica Place). SM Mall Security observed, on surveillance cameras, a vehicle that crashed into the store. Suspects were seen entering the store and ransacking it. Mall Security arrived in the area and observed the suspects flee on foot, with merchandise."

"The suspects fled in an awaiting unknown vehicle prior to SMPD personnel arrival. The suspect vehicle was towed to the police station for forensic processing."

"The suspects involved are described as 2 tall males wearing dark clothing. At this time the total loss is unknown," Flores concluded.

"I saw rolls of Slinky-style concertina wire being placed across the entrance to Santa Monica Place, at Broadway---some security guys and workers doing it and watching----I asked, "what's up, anything dramatic like break into Rolex or Vuitton"......and they said, "uh, like, YEAH----at 3 AM Monday morning they drove a CAR into the front door of Louis Vuitton and stole a lot of merchandise," said one eyewitness to the aftermath.

Luis Vuitton and other high end stores are frequently the targets of smash and grab robbers in Los Angeles County. According to the National Retail Federation, Los Angeles was among the top five cities affected by organized retail crime over the last year, alongside the San Francisco/Oakland area, New York, Houston and Miami.

The increase in smash and grab robberies appears to have followed California's effective decriminalization of stealing amounts of money less than $900. Theft of under $900 is a misdemeanor, and liberal California DA's such as Los Angeles County DA George Gascon no longer prosecute misdemeanors. AB 23 would restore some balance, by making the theft of $400 and above a felony. The measure would have to be approved by voters.