Earthquake with Preliminary Magnitude 4.2 Wakes Up Los Angeles County At 2 am on Jan. 25, 2023

The quake was centered in the Pacific Ocean about 10 miles south of Malibu, it registered 4.2 on the Richter seismographic scale. 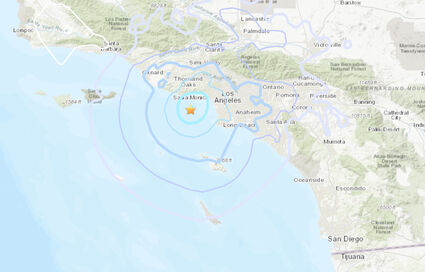 Earthquake with Preliminary Magnitude 4.1 Wakes Up Los Angeles County Just Before 2 am on Jan. 25, 2023

An earthquake with a preliminary magnitude of 4.2 on the Richter scale, jolted Santa Monica and other westside LA communities awake at 2 am on Wednesday morning. There were no immediate results of damage or injury.

It was the biggest earthquake in 30 years in Santa Monica, California.

The jolt was followed by an aftershock at 2:03 am, about 3 minutes later, which measured 3.5.

The quake was centered in the Pacific Ocean about 10 miles south of Malibu, the earthquake registered 4.2 on the Richter seismographic scale. 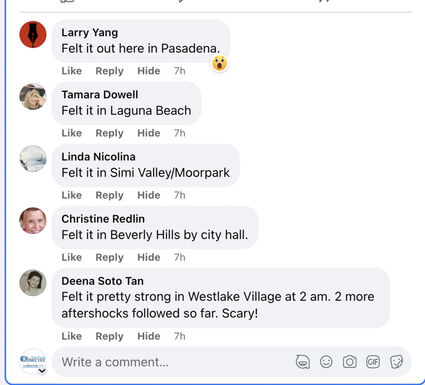 Did you feel it?

"Well, a M4.2 in Malibu doesn't shake Pasadena enough to wake anyone up. This is a similar location to the M5.2 that happened during the Rose Bowl game. That was felt in Pasadena with a "hmm, what was that? Do you think that was an earthquake?" Type of reaction" tweeted Dr. Lucy Jones.

"I'm in Sherman Oaks and it felt like a strong 4.2 here. Woke us all up and the pets bolted off the bed! Also 2nd EQ I've felt in 4 days. " tweeted Political Mama

"Here in PDR we really felt the first one, but none of the aftershocks. Don't recall anything during the Rose Bowl game at all." tweeted LA Woman.

"It woke me up in Pasadena! Though something else had briefly woken me up 20 min before so maybe I wasn't sleeping very soundly yet." tweeted Catherine Elder.