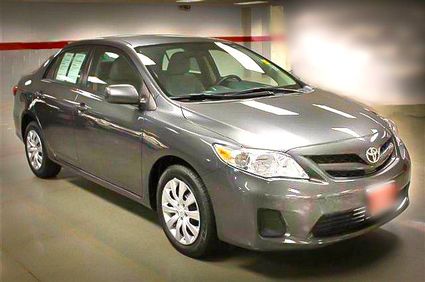 Hit and Run in Santa Monica

Santa Monica: A teenager from Santa Monica is sent to the hospital in critical condition after being struck by a car and now police need the public's help finding the person responsible.

They say the preliminary investigation revealed that the driver was heading east bound on San Vicente in the number two lane and the 17-yaer-old was jogging eastbound near the curb.

They say the driver struck the teen and continued driving fleeing the scene.

Another driver saw the jogger and called police.

The teenager was transported to the hospital and was in critical condition.

Police say the suspect's car is described as a 2010 to 2012 Toyota Corolla, magnetic gray metallic (dark gray) in color and the is believed to have noticeable collision damage to the front end.

A man is accused of shooting one man in the face and then allegedly a deputy while holding his baby, according to the Los Angeles county Sheriff's Office

They say it happened in Willowbrook on the 2400 block of East 126th Street in Los Angeles on January 26 at around 10 o'clock at night out side his ex-girlfriend's home.

They say the suspect a 43-year-old man drove to the home where he confronted his ex-girlfriend's new boyfriend, drew a revolver handgun and shot him in the face. He then drove away with is one-year-old baby still in the car, according to law-enforcement.

Deputies tried to stop the suspect's car, but when he refused to yield they say a pursuit was initiated.

They say eventually, the suspect drove back to the home on 126th Street where he left the car holding the baby one arm and the gun in the other.

The suspect pointed the gun at the officers who did not shoot out of fear of hitting the baby. They say this is when man allegedly fired a shot at the deputies.

The ex-girlfriend (the baby's mother) opened the front door and took the baby away from the suspect and returned inside the house. Once the ex-girlfriend had the baby, the suspect again pointed his handgun at the deputies and that is when a deputy involved shooting occurred.

The suspect was struck multiple times by gunfire from the deputies, according to authorites

He was transported to a local hospital where he was treated for his injuries. He was listed in critical condition but is expected to survive.

The victim of the attempt murder was transported to a local hospital and is also expected to survive.

The suspect's handgun was recovered.

Anyone with information regarding this incident was encouraged to contact the Los Angeles County Sheriff's Department's Homicide Bureau at (323) 890-5500.

A 47-year-old man who allegedly shot a security guard to death in Marina Del Rey has now been charged, according to authorities.

Patrick Odoikyene was shot and killed in the parking lot of an upscale apartment complex on the 4200 block of Via Marina on December 30.

They say, 47-year-old suspect Byron Keith Street, of Inglewood was arrested for an unrelated felony Fraud charge by Los Angeles County Sheriff's deputies a day after the murder. Street was charged with murder, burglary and felony vandalism. Street had previously been suspended by Odoi-Kyene, his immediate supervisor, for bringing his girlfriend to work, according to the District Attorney's Office.

Street was being held without bail.