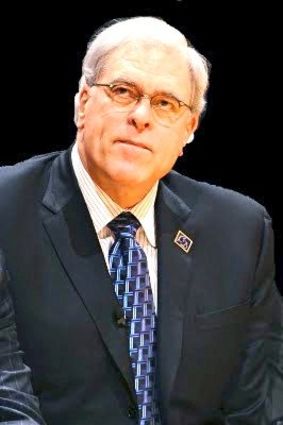 But the initial impact is that it was a grand day for the Knicks and a dreadful one for the Lakers.

Both teams began the day in horrible shape, both out of playoff contention, both needing a change in leadership.

Both with a dominating owner. But James Dolan of the knicks said he is gladly yielding authority to Jackson in building a more cohesive Knicks roster.

And Jim Buss passed on the opportunity and remains the top man in the Lakers' muddled position.

Jackson leaves Playa del Rey for at least partial residence in New York, and right away he seems to be working things out with free agent Carmelo Anthony.

It's the first example of what will happen if the Lakers, with Jim Buss leading the way, want a free agent but a heavyweight such as Jackson or Pat Riley wants the same one.

So the Lakers, who coveted LeBron James, then downgraded to Anthony, now may do nothing more than hold onto Kobe Bryant and Pau Gasol, both supurb players but fighting the battle against age.

Jackson has never been a front office executive before but commands such respect in the NBA he doubtlessly will give the Knicks a boost.

But whether or not the Knicks become better the removal of Jackson from the Lakers, even as a consultant, severly hampers them in ffee agency.

They incorrectly reasoned that Dwight Howard would stay because the city of Los Angeles has more to offer than Houston.

Howard chose the coaching of Kevin McHale, helped out by the work of former Rockets' star center Hakeem Olajuwon. And he's thriving.

So where are the Lakers of next season heading? Do they dare bring back Mike D'Antoni as coach? Do they play the three-point shooting game again, the one that has them with 22 more losses than wins?

Will Jim Buss ever sacrifice authority to someone far better qualified than him to make player personnel decisions?