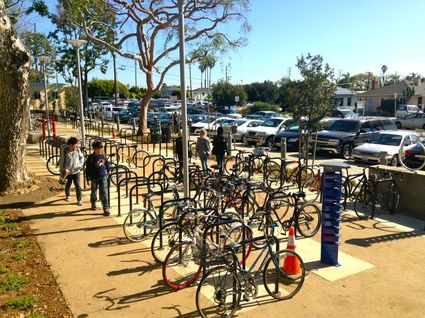 "It's Your Call" Tackles SM Parking

and Traffic on May 1st

Viewers can call in with their questions about parking and traffic in Santa Monica. Guests Sam Morrissey, the City of Santa Monica's Traffic Engineer, and Frank Ching, the Parking Administrator for the City, will be on hand to give answers, background and information. The program is hosted by LaFern Cusack, who also hosts programs for ESPN Radio and Radio Disney.

In addition, viewers will be invited to text in their answers to questions throughout the program as CityTV inaugurates interactive capability to its live programming.

Residents can submit their questions in advance to [email protected] or call them in while the show is on live at 310-458-4950.

Santa Monica College is pleased to announce that two student film-production projects have won Awards of Merit at the Best Shorts Competition. The Award of Merit is given to works that qualify as "notable artistic and technical productions," according to the competition's website.

"I am incredibly proud of SMC's filmmakers and their projects, which show a high level of craft and, consistent with our college's mission, truly have something to say about the world we live in," says Salvador Carrasco, head of SMC's Film Production Program. "In winning recognition from the Best Shorts Competition, our students join the ranks of other high-profile professionals who have been honored with this internationally respected award."

The Best Shorts Competition, headquartered in La Jolla, CA, is an international film competition that strives to give positive exposure to talented directors, producers, actors, and members of the creative teams who produce high-quality short films, webisodes, mashups, and new and experimental media. Entries must be 57 minutes or less in length, and are judged by respected professionals in the film industry.

They received the gold medal for the 2014 Winter Guard competition season, with a score of 89.81 out of a possible 100.

Led by captains Liza Mirkin and Rachel Theis, this is the highest score and placement the group has received in many years.

The group, which meets five days a week before school, plus outside evening rehearsals, is coached by Mr. Juan Gonzalez and Ms. Jody Anderson. The santa monica high school Winter Guard is under the auspices of the Samohi Band Program, directed by Kevin McKeown and Terry Sakow.

Many of these students take part in the Samohi "Viking" Marching Band first semester, and create this competitive ensemble during the second semester.

Next year will mark the 100th year for the Samohi Band Program, and will feature the band in new uniforms for the first time in over fifteen years. Any donations towards the new uniforms are welcome; interested parties can contact Mr. McKeown [email protected]

A wild naked man snarled PCH traffic after provocatively climbing on the roof of his red Tesla sportscar and taunting responding firefighters in the buff.

In a provocative video uploaded to YouTube, Pacific Palisade firefighters are seen attempting to coax the man down. Throughout their endeavor, the man proudly stretches and flaps like a bird and wiggles in and out of his sunroof while throwing clothes in the air.

Witnesses say the man jumped out of his Tesla waving his shirt before running down to the beach where he stripped off his clothing. When firefighters and police arrived at the scene, he ran back to his car where he went a bit crazy.

The man was wrapped in a restrictive jacket and blankets, and then transported to a hospital for evaluation.