"The Heat" Moves To Santa Monica 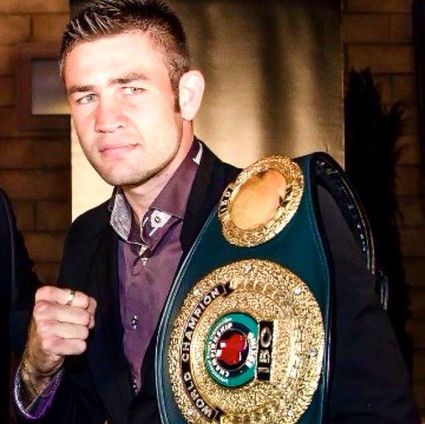 Instead of maintaining the status of being a big fish in a small pond in a country that has produced a number of champions and great fighters, Chris Van Heerden has decided that a move to the United States (Santa Monica, California) is what is necessary for his career.

Van Heerden, a tall southpaw nicknamed "The Heat", has lost one and drawn one of his 21 professional fights. Van Heerden, making his first USA debut against veteran Cosme Rivera in Hollywood, California, he beat Rivera in the fourth round. The IBO welterweight champion, showed the 37-year-old Mexican no mercy, dominating the fight, scheduled for eight rounds, from the opening bell and keeping up the pressure. In the end the fight the ring doctor made the call for the referee, Raul Caiz, to stop the assault. Then only two months later, in April 2014, Van Heerden fought in Santa Monica, Caifornia at Barker Hangar. Once again Van Heerden continued his spectacular USA start with a split decision victory over Ray Narh. . "I am with King World Promotions," Van Heerden said "I am with the right management team. They will build me up." Van Heerden has had a seven-bout winning streak and now looks forward to his next opponent.

In the meantime Van Heerden has been helping coach Freddy Roach at the Wild Card Gym in Hollywood, California getting Miguel Cotto get ready for his fight against Sergio Martinez on June 7 in Madison Sqaure Garden New York City.

"I am getting in world class sparring experience, something I would probably not have been exposed to in South Africa," said Van Heerden. "Now I am leaving my home in Santa Monica for a few weeks and heading to San Diego for a training camp with Mexican Super Star Canelo Alvarez. I always knew I belong amongst The Best in the World! I'm Humbled & I'm with my feet firmly on the ground GOD is in control soon ill be fighting the best there is. I am so grateful for this opportunity, sparring two of the world's top boxers", said Chris Van Heerden

Better sparring partners and better gyms in the United States attracted "The Heat", where he saw it first hand while visiting Southern California. Fighters like Manny Pacquiao and Sergio Martinez, with at least one loss, migrated to the United States from the Philippines and Argentina respectively and carved out great careers.

It was his first fight in the United States and Van Heerden, 27, was out to make a good impression. The South African won the vacant IBO welterweight in September 2011 when he outpointed Kaizer Mabuza and made successful defenses against Sebastian Andres Lujan and Matthew Hatton, beating both on points.

"I love my country (South Africa), but there are three main reasons why I came to the United States," Van Heerden told the Santa Monica Observer in an interview. "First, I've only fought four times in a span of two years. Second, there isn't a lot of opportunities for fights in South Africa. And third, there isn't a lot of good sparring. I had heard about what's in the United States and came to see it for myself."

Van Heerden (20-1, 10 KOs) has been enjoying his new surroundings in Santa Monica, California and has spent most of his time in Southern California, where he has visited gyms and attended fight cards in the area.

First and foremost, Van Heerden wants to utilize his time in the United States to make him become a better fighter. Van Heerden holds a title belt, has lost only once in his career, and is admired and respected in his homeland of South Africa.

"I know I've competed and I'm happy for what I've accomplished so far. But honestly, I know I could become twice as good as I am right now if I worked here in the United States. I love fighting a lot and this is where I feel it benefits me."

Van Heerden has not fought since winning a one-sided 12 round unanimous decision over Matthew Hatton on March 2nd in Johannesburg, not far from his home in Meyerton. He has won his last five bouts in a row since a highly disputed 12 round split decision loss to Nikola Stevanovic in May of 2010.

One might think Van Heerden might miss his surroundings since he made his migration to the United States complete. He may not see his family regularly or hang out with friends as often, but it is a sacrifice he is willing to make and to fulfill that dream to become a legitimate contender.

"Traveling to the United States is not going to affect me. I'm so motivated to come over here to the United States and start over. I've lived on my own since I was young and I would see my family every so often. "This is a career change where I will make the most of something. I'm just very excited for it".

A South African friend and big supporter of Chris, Torsten Kunert stated "You will find "The Heat" jogging along the Santa Monica promenade or pier in the early hours of the morning, or training in one of the top Southern California boxing gyms. Anyone who wants to attach their brand or name to this Professional fighter will pick up the marketing rewards. Having lived in SA, I know what Chris gave up in SA, and he will be the Champion of champions in his class. I have never met a more dedicated and motivated boxer than Van Heerden" explained Kunert.