Stoneware Yogurt Maker: Not For Novices 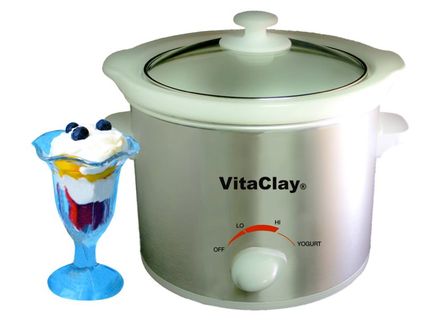 I consider myself something of a yogurt expert. Present to me any supermarket shelf laden with a rainbow of yogurt cups made by various companies, each one boasting unique subtleties of texture, flavor, origin, or nutritional value, and in no time flat I will pick out the best brands based on my experience. Having bought enough yogurts to fill landfills with all those plastic cups, I was ready for something new and different. For a while now I've longed to be able to make my own yogurt. I imagined it would be great to invent my own flavors, to control everything that goes into it so I don't have to worry about hidden chemicals or sky-high sugar content, and furthermore to store my yogurt in reusable containers rather than those dreadful single-use plastic cups omnipresent in the industry of commercial yogurt.

That's why, when VitaClay offered me the opportunity to review their new Stoneware Yogurt Maker and Personal Slow Cooker, I was instantly filled with noble visions of saving the world from my plastic consumption, as well as creating unique and healthy yogurts for myself and my friends and family to enjoy. I was so excited when the package arrived containing a sleek, enticing yogurt maker just for me. It even came with a user's manual and recipe book, inspiring me to get started with no time to spare.

But I soon discovered that cooking yogurt is no small feat. First the milk must be boiled to a magic level where it gets so fizzy it tries to climb out of the saucepan. Then it must be blended thoroughly with a quantity of plain yogurt as a starter (so I had to buy yet another of the dreadful plastic yogurt cups from the store that I had intended to evade) and then it is cooked in the machine for six to eight hours – meaning I had to plan ahead and start the process early, otherwise I'd be up all night. And even when I followed all those instructions, my first batch of yogurt was...less than life-changing. It was incredibly inconsistent, made up entirely of chunks that refused to smoothen out or blend into the yogurt-y water surrounding them. It tasted all right, as far as plain yogurt goes, and it was nice to be able to control what sweeteners went into it and keep it all natural. I also stored it in reusable containers in the fridge, where many of them fermented for weeks and were eventually thrown away.

Undaunted, I resolved to make the yogurt maker do its job! Armed with almond milk for a change, I went into battle again, following the recipe provided with my own nutty twist. I was sure this time I'd get an awesome, perfect batch of smooth, creamy almond yogurt. But my efforts and waiting were for naught – all I ended up with was a bowl full of almond milk, unscathed after eight hours of cooking. Foiled again! But I didn't give up, and went into battle a third time the very next day, this time playing by the rules, using only dairy milk and following the recipe provided to a t. Third time's the charm, right? After eight anxious hours I lifted the lid, eager to see the fruits of my labors finally pay off. Instead, all I saw was another batch of chunky yogurt water, exactly as unremarkable as the first batch I made.

I don't consider myself defeated – I will soldier on, gradually chipping away at the exclusive art of making yogurt until I prevail! But meanwhile, what can I say about the VitaClay 64 oz. Yogurt Maker and Personal Slow Cooker? I'm not condemning it to be a poor piece of machinery; for all I know it is capable of turning out fantastic yogurt – to those who can crack the code of its deceptively simple instructions. In other words, it's not for novices, despite the simple-looking, user-friendly exterior and affordable price. It may take years of practice and meditation, and even then one may not hope to achieve the honor of winning the battle with the machine to create good yogurt.

The yogurt maker's alter ego – the insidious slow cooker – is a notable feature not to be overlooked when considering buying the machine. While I personally am not much better with the concept of slow-cooking than I am with yogurt-making (go figure) the slow cooker function is handy as it means you can store one machine that does two jobs. I made some of the slow cooker recipes included in the recipe book, and found they were convenient and well portioned by the size of the stoneware insert to make only one or a few servings. However, the recipe book only contained rather boring recipes.

My overall take? The VitaClay Yogurt Maker and Personal Slow Cooker is a handy and intriguing implement. That recipe book, however, might just be evil... whether the machine or the vague instructions are at fault, novice yogurt makers should not expect to turn out perfect yogurt with the first (or second, or third) batch. But the machine does perform its functions pretty well and is easy to clean and store, and at $35 it's very reasonably priced. If you're willing to go into battle for a cleaner and healthier lifestyle, consider this machine.