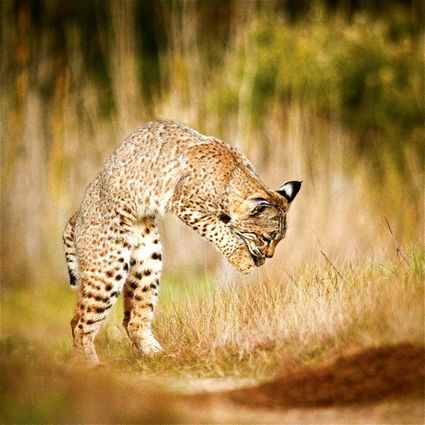 A recent study documents that freeways, urbanization and a disease outbreak have led to significant genetic differentiation among bobcats in and around Santa Monica Mountains National Recreation Area, but that natural selection is helping to reduce potential negative effects. Researchers from UCLA and the National Park Service collaborated on the peer-reviewed article, recently published in the journal Evolutionary Applications.

The study shows that even for wide-ranging species such as mammalian carnivores, the large and busy freeways of Southern California are such significant barriers to movement that they restrict genetic exchange. The result is that the 405 and 101 Freeways have fragmented local bobcats into three genetically distinct geographic populations (see image).

The largest contiguous population is found west of the 405 Freeway, from Topanga to Point Mugu. Another distinct group inhabits the relatively small, highly urbanized stretch of the mountains east of the 405 that includes the Hollywood Hills and Griffith Park. The open space patches north of the 101 Freeway that comprise the Simi Hills and the Conejo Valley are home to the third genetically distinct group of bobcats.

Especially in small populations, over time genetic differentiation can lead to reduced genetic diversity, which has also been documented in mountain lions in the Santa Monica Mountains. Of the more than 350 bobcats sampled from 1996-2012 for the study, the eastern population comprising the hillside communities east of the 405, including the Hollywood Hills and Griffith Park, had the lowest genetic diversity in the Santa Monica Mountains.

"In the face of rapid environmental change and anthropogenic stressors, genetic diversity helps ensure the long-term survival of a species," said UCLA researcher Dr. Laurel Klein Serieys, the lead author of the study. "If we want to preserve biodiversity in urban systems, maintaining habitat connectivity and reducing factors that contribute to increased disease susceptibility, such as the use of anticoagulant rodenticides, is critical."

The authors reported two other important findings: the negative impacts of disease, on the one hand, and evidence of natural selection helping to reduce those impacts, on the other. A deadly mange outbreak affected the Thousand Oaks area bobcat population north of the 101 Freeway from 2002 to 2006. The disease, which National Park Service researchers previously found to be associated with exposure to rat poison, resulted in a severe population decline and a genetic bottleneck leading to a significant decrease in genetic variation. This rapid change in genetic composition occurred in a time period equivalent to a single bobcat generation, and the genetic differentiation was actually greater than that found across the freeways.

"These findings suggest that all is not lost in bottlenecked populations because natural selection can still act," said Dr. Robert Wayne, a professor of evolutionary biology at UCLA and senior author on the paper. "However, the combined effects of small population size, isolation and rodenticides on population health overwhelm the capacity for some of these populations to respond and maintain themselves. The solution is to establish connections between populations so that their numbers can be maintained by migration and to eliminate the use of rodenticides."

The study also emphasizes the value of long-term research, such as the National Park Service has been conducting on bobcats since 1996, and of combining work in the field and in the lab, such as genetic and disease analyses.

"It is only through studying the bobcat population over many years that we have been able to understand some of the long-term effects of urbanization," said Seth Riley, wildlife ecologist for the National Park Service and study co-author. "The contributions of graduate students, post-docs and faculty at UCLA and other universities has been critical to that understanding."

Bobcats (Lynx rufus) are small, spotted cats that inhabit most of North America, including all of the United States, most of Mexico and southern Canada. Often mistaken for mountain lions in southern California, bobcats are much smaller and have a short tail, ear tufts and a pronounced facial ruff, similar to a beard. They typically weigh between 12 and 25 pounds.

Santa Monica Mountains National Recreation Area is the largest urban national park in the country, encompassing more than 150,000 acres of mountains and coastline in Ventura and Los Angeles counties. A unit of the National Park Service, it encompasses a seamless network of local, state and federal parks interwoven with private lands and communities. As one of only five Mediterranean ecosystems in the world, SMMNRA preserves the rich biological diversity of more than 450 animal species and 26 distinct plant communities. For more information, visit http://www.nps.gov/samo.