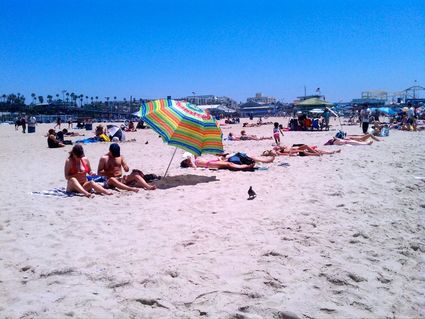 Folks on the Beach

Heal the Bay analysts assigned A-to-F letter grades to 92 beaches in L.A. County for three reporting periods in the 2014-2015 report, based on levels of weekly bacterial pollution. Some 94% of beaches received A or B grades for the high-traffic summer period (April-October 2014), a 4% improvement from last year's grades. The 94% figure also marks a 10% gain from the county's summer average for the previous five years.

While ongoing drought plays a significant role in improved grades, storm-drain diversions and other enhanced infrastructure also have paid dividends at chronically troubled beaches. Popular but historically failing beaches at Avalon Harbor in Catalina and Doheny Beach in Orange County, for example, now regularly receive A or B grades because of multi-million dollar investment in pollution-abatement measures.

While the news is encouraging, Los Angeles County still leads the state in the number of beaches with poor water quality. Overall, one in 13 L.A. County beaches received grades of C or lower during the busy summer season. The news is worse during wet weather, when nearly half of the beaches received an F grade. The growing public health risk is troubling for the region's sizeable number of year-round surfers, divers and other ocean-users.

L.A. County is home to three of the 10 locales listed on Heal the Bay's annual Beach Bummer List, which ranks the most polluted beaches in the state. Mothers Beach in Marina del Rey and Cabrillo Beach harborside in San Pedro, both enclosed sites with poor circulation, came in at No. 2 and 9 on the Bummer List, respectively. The beach at Santa Monica Pier, which has grappled with poor water quality for years despite numerous remediation projects, entered the list at No. 6.

And for the first time in history, a Huntington Beach locale made the Bummer List – Huntington State Beach at Brookhurst Street, which joined in the No. 10 position. To its credit, the Orange County officials have moved the water-quality sampling location closer to potential sources of pollution, which played a role in poorer grades. Los Angeles County has long tested at so-called point zero locations to better measure beach water quality.

Besides the black eye at Brookhurst Street, Orange County notched very good grades, well above state average. Some 95% of 102 beaches monitored in the summer received A grades, a 2% gain from its five-year summer average. Ventura County once again enjoyed some of the best water quality in the state, earning perfect A grades at all of its 39 monitored beaches in the summer reporting period for a second straight year.

For a detailed look at beach results for each county and report methodology, please refer to our complete report. A PDF version is available at http://www.healthebay.org/beachreportcard.

Swimming at a beach with a water quality grade of C or lower greatly increases the risk of contracting illnesses such as stomach flu, ear infections, upper respiratory infections and rashes. A UCLA study concluded that the regional public health cost of gastrointestinal illnesses caused by recreating in polluted ocean waters totals at least $21 million annually in Los Angeles and Orange counties.

Heal the Bay also has expanded its assessment of recreational water quality to include freshwater swimming locations for the first time. Through this pilot project, we collected data in 2014 on water quality and recreational patterns at three swimming holes in the Santa Monica Mountains. We found that of the three sites, the two most popular for swimming, Rock Pool and Las Virgenes Creek in Malibu Creek State Park, suffered from poor water quality. These conditions pose possible public health risks and highlight the need for signage, education, and continued monitoring.

Urban runoff remains the leading source of bacterial pollution at local shorelines. After a typical rainstorm, storm drains funnel as much as 10 billion gallons of polluted runoff directly into Santa Monica Bay, without benefit of any treatment. Even during a dry day, some 10 million gallons of bacteria- and trash-laden runoff finds its way to the sea via the stormdrain system.

While low rainfall totals have contributed to significantly improved water quality statewide, it should be noted that California often swings from extended dry periods to shorter periods of intense, wet weather.

In response, Heal the Bay's policy staff is advocating for public funding measures to build infrastructure projects that capture, cleanse and reuse stormwater rather than dumping it uselessly into the sea. Progressive city planning, smart public infrastructure and so-called Low Impact Development in the private sector would turn a nuisance into a resource.

"In a time of severe drought, it's madness to send billions of gallons of runoff to pollute the sea when we could be capturing and cleansing that water for daily use," said Sarah Sikich, vice president of Heal the Bay. "The rains will return, and when they do, we need to capture this valuable resource to maximize our local water supplies and keep polluted water out of our ocean'"

On the positive side, three beaches in Los Angeles County placed on Heal the Bay's Honor Roll, which recognizes beaches monitored year-round that score perfect A+ grades for the report's three time periods. Orange County and Ventura County each earned four spots on the Honor Roll in this year's report. A full list of Honor Roll beaches statewide can be found in the report.

Final results of pilot study are due this fall, but promising early results indicated that beach managers may be able to post a warning notice immediately at pollution-impacted beaches rather than waiting for bacteria testing, which can days to complete. These new models will protect public health by providing more timely and advanced water quality information.

About the Beach Report Card

All county health departments in California are required to test beach water quality samples for three types of indicator bacteria at least once a week during the summer season. Many counties also monitor heavily used beaches year-round. Heal the Bay compiles the complex shoreline data, analyzes it and assigns an easy-to-understand letter grade.