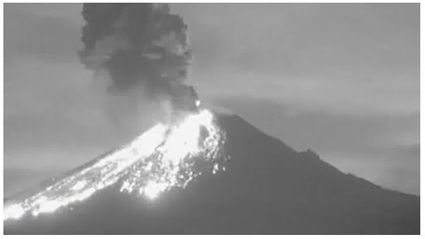 A small earthquake has rattled parts of Southern California, but there have been no reports of damage or injury.

The U.S. Geological Survey says the 3.4 magnitude quake hit at 9:50 p.m. Monday and was centered about 4 miles south of Santa Clarita in northern Los Angeles County.

A sheriff's deputy in Santa Clarita says there have been no calls as a result of the quake.

Interestingly, the quake comes at the same time that a volcano in Mexico erupted, 400 miles to the south of the Santa Clarita earthquake's epicenter. It was not clear other the two events are related.

The volcano had a relatively strong explosion yesterday evening at 20:31 local time. It produced a 2 km ash column and ejected incandescent fragments that landed in to up to 3.5 km distance on the eastern and southeastern flanks, igniting some bush fires on the upper slopes of the volcano.

The Associated Press contributed to this report