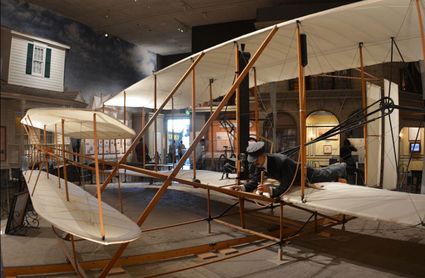 Archivists looking for them have found Lost plans for Wright brothers' 'Flying Machine' found after 36 years, the Washington Post reports.

After being displaying in 1980 Bureau of National Archives accidentally sent them to a limestone Kansas cave where millions of records of less historical importance are stored. No one had seen them since. One recalls the final scene of Raiders of the Lost Ark, where the Ark of the covenant is sent to a U.S. Government storage facility allegedly to be studied by hundreds of experts, and is then forgotten.

The Archivist, , had been sent to look for it in boxes stored in that Limestone cave near Lenexa, Kansas City. She tore open an envelope that incongruously said "White House," and on the cover of a book, was the patent No. 821,393, and the famous names Orville Wright and Wilbur Wright.

And next to the word invention, the cover form read: "Flying Machine."

It was, indeed, the century-old patent file for the Wright brothers' first heavier than air flying machine - a file that contained one of history's greatest patent applications. And until last month, it had been missing for 36 years.

Varga, a senior conservator, brought it back Tuesday, and found it to be in good condition in the Maryland conservation lab Wednesday.

But how did such a treasure wind up in a storage cave 1,000 miles from Washington?

Most likely through a simple filing mistake decades ago, Bosanko said. "Unfortunately, with billions of pieces of paper, things sometimes go where they shouldn't be," he said.

Parts of the file are scheduled to be exhibited in the National Archives Museum's West Rotunda Gallery in Washington starting May 20.

It should have been stored in a "treasure" vault with other priceless documents in the Archives building in Washington, National Archives and Records Administration Chief Operating Officer William J. Bosanko said last week.

But when officials preparing for a commemoration looked for it there in 2000, it was gone, he said. Experts had been searching for it ever since.

Then two weeks ago, Kansas archivist Bob Beebe emailed a colleague at the Archives complex in College Park: "We found it."

The find came as the agency beefs up its Archival Recovery Program, which hunts for missing documents and artifacts, said investigative archivist Mitchell Yockelson.

Two extra archivists were detailed to what is essentially a "cold case squad" in February, he said.

There was the possibility the Wright patent file had been stolen, as other documents have been, such as telegrams from Abraham Lincoln, Yockelson said in an interview Wednesday at the College Park facility.

"But . . . we felt, I guess, all along . . . that it was probably misfiled," he said. "And figuring out where is that misfile," among the millions of patent papers, was the challenge.

Bosanko said: "If somebody puts something back in the wrong place, it's essentially lost. In this case, we didn't know. We had to ask ourselves, 'Is it something that could have been stolen?' "

The archives has numerous missing documents - from letters of Civil War generals and telegrams from Lincoln to World War II bombing maps. The Wright brothers' patent file was among the most prominent.

The Wright Brothers, inventors and bicycle mechanics who never married, applied for a patent for the world's very first airplane on March 23, 1903, less than a month after they started building it. The primitive air ship was composed of fabric and wood.

Nine months later a Coastguardsman filmed as the Wright Flyer flew for 12 seconds and 120 feet. It was Dec. 17, 1903, and the Aviation age had begun at Kill Devil Hills, North Carolina. Both Ohio and North Carolina therefore claim to be the birthplace of aviation.

Only two newspapers, the New York Times and the Chapel Hill Observer, thought the flight worthy of mention at the time, but it would change the world.

The Wright Flyer (often retrospectively referred to as Flyer I or 1903 Flyer) was the first successful heavier-than-air powered aircraft. It was designed and built by the Wright brothers. They flew it four times on December 17, 1903, near Kill Devil Hills, about four miles south of Kitty Hawk, North Carolina, US. Today, the airplane is exhibited in the National Air and Space Museum in Washington D.C.

The U.S. Smithsonian Institution describes the aircraft as "the first powered, heavier-than-air machine to achieve controlled, sustained flight with a pilot aboard."[2] The flight of Flyer I marks the beginning of the "pioneer era" of aviation.

The Flyer was based on the Wrights' experience testing gliders at Kitty Hawk between 1900 and 1902. Their last glider, the 1902 Glider, led directly to the design of the Flyer.

The Wrights built the aircraft in 1903 using giant spruce wood as their construction material.[2] The wings were designed with a 1-in-20 camber. Since they could not find a suitable automobile engine for the task, they commissioned their employee Charlie Taylor to build a new design from scratch, effectively a crude gasoline engine.[3] A sprocket chain drive, borrowing from bicycle technology, powered the twin propellers, which were also made by hand.

The Flyer was a canard biplane configuration. As with the gliders, the pilot flew lying on his stomach on the lower wing with his head toward the front of the craft in an effort to reduce drag. He steered by moving a cradle attached to his hips. The cradle pulled wires which warped the wings and turned the rudder simultaneously.

The Flyer's "runway" was a track of 2x4s stood on their narrow edge, which the brothers nicknamed the "Junction Railroad".

By the time the patent was granted in 1906, the file was filled with letters, affidavits, fee receipts, drawings, photos and examiner's notes, among other things.

"Be it known that we Orville Wright and Wilbur Wright, both citizens of the United States, residing in the city of Dayton and state of Ohio, have jointly invented a new and useful machine for navigating the air," says the document.

Archivist Chris Abraham had been working for the recovery program for about three weeks and had volunteered to hunt for the Wright patent file.

"I had an interest in the Wright brothers," he said in an interview. "This has been on our list for quite some time."

The file had once been stored in the National Archives building in Washington, but in 1969, it was transferred to a federal records center in Suitland, Md.

In 1979, parts for the file were lent to the Smithsonian for an exhibit and then returned to Suitland.

"We had a pull slip from our files saying that the document was returned to the National Archives in 1980,"Abraham said. "But . . . that's where the trail goes cold."

Abraham knew the Wrights had other patents, which weren't in the treasure vault.

He thought that they were with the archives' vast patent records stored in the Lenexa cave. He asked Beebe to check for Wright patents there to see whether missing file might be among them.

The cave records center opened in 2003, and the Archives patent files were sent some years later, Beebe said. "We have pretty much everything, except for certain files that are deemed very historical."

He said he memorized the missing Wright patent's number and, guided by Abraham, began checking box after box of records in the 15-foot-high underground stacks.

But he was asked to check one more box, which he did around 7:30 a.m. March 22. He said he lifted the lid, and there, stuffed among the neat patent folders, was a fat manila envelope.

The upper left-hand corner bore the logo "the White House." And in the center someone had written "Wright Brothers' Patents." As he removed one of the folders inside, he spotted a partially obscured number that ended in 393.

"This is what we're looking for," he said he thought at the time.

With shaking hands, he emailed Abraham, who contacted Yockelson. 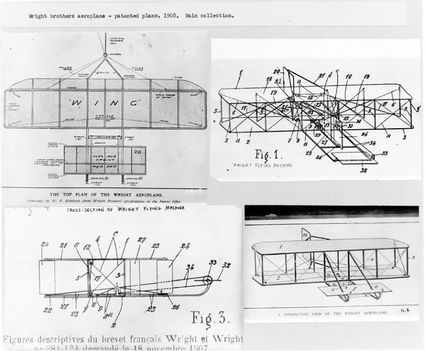 From the patent plans.

Abraham said he did not know why no one had thought to check the other Wright patent files before. "It was just one of those things," he said.

As for "the White House" logo, Bosanko said some frugal archivist probably used a recycled envelope.

"This wasn't hidden in the White House or anything all these years," he said.

This article uses information and quotes from the Washington Post.