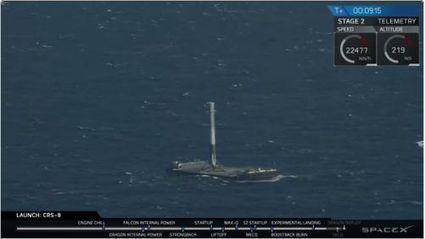 After several unsuccessful attempts to land an unmanned rocket on a football field-sized floating barge in the Atlantic Ocean, Elon Musk's SpaceX finally successfully completed it Friday afternoon. This follows its first resupply of the International Space Station, since the company's Dragon rocket exploded in 2015.

The landing, the first ever of a rocket's first stage at sea is a step toward the future for the commercial spaceflight industry, and for Hawthorne's SpaceX.

"It's another step toward the stars. In order for us to really open up access to space we have to have full and rapid reusability," Musk said at a press conference afterwards.

The companies' efforts to recover their rockets is part of what Bezos calls the "Holy Grail" quest of lowering the cost of space flight, which has been so prohibitively expensive that it has long been the exclusive domain of governments.

Traditionally, rocket stages are ditched into the sea after firing their engines for a few minutes and boosting a second stage, or a capsule, to space.

But if the commercial sector can build reusable rockets, that would reduce the cost of space greatly, and humanity would evolve toward the dream of routine space travel.

SpaceX broadcast the launch and landing live on its website, where some 80,000 viewers watched the booster descend toward the platform. The first stage was hurtling toward space when it started a bit of aerial acrobatics, turning itself around and heading back toward Earth.

As it approached the platform, the booster was tilted into the wind but was able to right itself just before touching down, about nine minutes after liftoff. Crews were expected to board the ship and secure the rocket to the platform.

"It's quite a tiny target. It's like trying to land on a postage stamp there," Musk said. "It's like a carrier landing versus a land landing."

At SpaceX's headquarters, just outside of Los Angeles, employees broke out in raucous applause, as congratulations poured in from across the country.

Canadian astronaut Chris Hadfield and Buzz Aldrin, the second man to walk on the moon, tweeted their well wishes. "Opens the imagination to what is possible," Hadfield wrote.

President Obama also tweeted his congratulations to SpaceX, saying, "It's because of innovators like you and NASA that America continues to lead in space exploration."

Space Exploration Technologies Corporation (SpaceX) is an American aerospace manufacturer and space transport services company with its headquarters in Hawthorne, California, USA. It was founded in 2002 by former PayPal entrepreneur and Tesla Motors CEO Elon Musk with the goal of creating the technologies to reduce space transportation costs and enable the colonization of Mars. 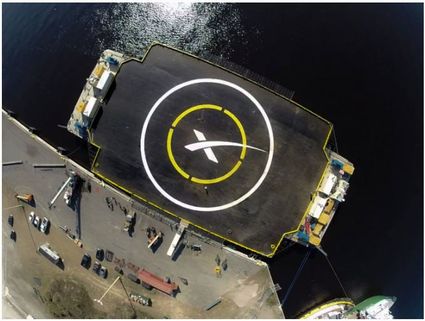 The launch of SES-8, in 2013, was the first SpaceX delivery into geosynchronous orbit, while the launch of the Deep Space Climate Observatory (DSCOVR), in 2015, was the company's first delivery beyond Earth orbit. On December 21, 2015, SpaceX successfully returned a first stage back to the launch site and accomplished a vertical landing, the first such accomplishment by a rocket on an orbital trajectory.

NASA awarded the company a Commercial Orbital Transportation Services (COTS) contract in 2006, to design and demonstrate a launch system to resupply cargo to the International Space Station (ISS). SpaceX, as of May 2015 has flown six missions to the ISS under a cargo resupply contract.

NASA also awarded SpaceX a contract in 2011 to develop and demonstrate a human-rated Dragon as part of its Commercial Crew Development (CCDev) program to transport crew to the ISS.