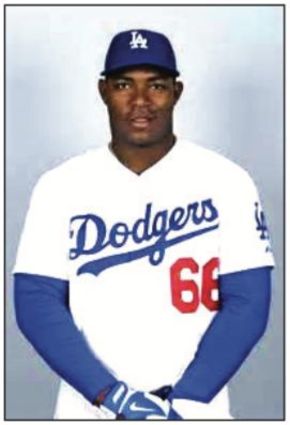 There's no doubt that Yasiel Puig has a lot of baseball talent.

But he's been so erratic with the Dodgers that he's inspired opinions from columnists and fans that he should be traded.

In spring training we learned that Puig had contacted a trainer who used to help him out. Puig was eating right and wanted the guy to help him again. And that happened.

Then there was Puig taking baseball seriously, cutting down on the maddening mistakes the young- ster from Cuba had made on the base paths.

If this was real the Dodgers wanted to see it when the season began this week.

In the rst two games, both shutout vic- tories over the Padres in San Diego, Puig hit two triples.

The Dodgers have a new manager. Puig tested the patience of Don Mattingly. That's no secret. But Puig has a better relationship, at least so far with Dave Roberts.

Puig was 22 when he made his Dodger debut in 2013. His boundless energy included taking far too many chances on the bases.

I remember a game when Puig reached third base on an opponent's misplays and then, for no apparent reason, kept running and became an easy out as he tried to score.

And I remember the reaction of an announcer on DirecTV's baseball channel who didn't talk for a few seconds after the play ended.

He then apologized, explain-

ing ":I was unable to talk. I felt like Vin Scully would be when he saw Puig rounding third."

But Puig is now 25 and hints of being more mature.

I think the Dodgers will have a hard time reaching the playoffs this season.

The Giants did a lot more to improve their status in the off-season and a second place nish isn't likely to earn the Dodgers a playoff berth. Both wild card teams last season came from the division that includes the Cubs and Pirates as well as the Cardinals.

But a couple of games into the season the Dodgers have hope. Especially If Puig is ready to be a consistent contributor.