An Allegory On Social Class Warfare 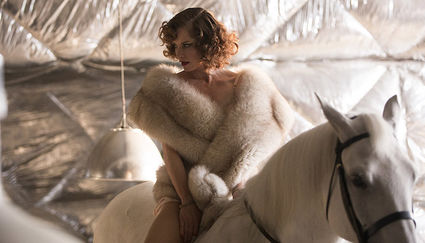 British director Ben Wheatley first caught the attention of many when he threw his hat into the feature film ring with "Kill List". Already known for his episodic television work across the pond, "Kill List" made one sit up and take notice of Wheatley's directorial storytelling skill.

Now, with HIGH-RISE, Wheatley firmly solidifies himself as a visionary thanks to his stylized interpretation of Amy Jump's adaptation of the 1975 J.G. Ballard sci-fi novel of the same name which, in the hands of Jump and Wheatley, transitions from an allegory on social class warfare into a deliciously creative opus of societal anarchy within the confines of one "high-rise" and its residents. And the fact that Wheatley has A-listers Tom Hiddleston, Luke Evans and Jeremy Irons on board certainly doesn't hurt the film's appeal. In short, HIGH-RISE is quite simply, mind-blowing delicious madness.

We first meet Robert Laing as he sits on a 25th floor balcony, roasting some sort of meat on a makeshift spit over an open fire. He is covered in blood. The balcony is strewn with what looks like the remnants of war. As the camera widens just a bit and begins to pan inside, there is war-torn wreckage everywhere. The mind reels. Where are we and what happened?

Rewind three months as Robert Laing arrives to take up residence in the HIGH-RISE. Well-dressed, polished, mannered, although he wants to appear as an "every man", Laing's very demeanor belies his "averageness". A well respected neurologist and researcher, there is something "more" to him; and I'm not just talking about him laying naked on his patio with just a well placed bit of reading material as he is ogled by single mother Charlotte from her balcony above. But it's thanks to this "meeting" that we start to learn of the caste hierarchy within the HIGH-RISE.

There is a distinct line between the "haves" and the "have nots". The "haves" reside on the upper floors in spacious, elegant, well apportioned apartments while the "have nots" live on the lower floors in cramped apartments, some with no windows, sometimes with no electricity or running water. Watching HIGH-RISE, one's thoughts are immediately transported to Bong Joon Ho's equally visionary and exciting "Snowpiercer." Where Bong Joon Ho examined the class system horizontally within the confines of a train, Wheatley addresses the subject matter in vertical fashion, metaphoric to climbing a ladder.

Thanks to Laing's meeting with Charlotte, Laing (and the audience) is then introduced to some of the other key residents of the HIGH-RISE, including "The Architect", Anthony Royal, who resides in the 50th floor penthouse complete with manicured outdoor rooftop gardens and what appears to be 24kt gold fixtures. Royal, "the architect" of this 50-story concrete super structure envisions the skyscraper and its residents as part of a grand social experiment to be incorporated throughout the world, and sees this as a "crucible for change." Aiding in the providing of this lay of the land is Richard Wilder, a documentary filmmaker who is never without his camera (unless nailing one of the more comely women in residence and ignoring his very pregnant wife Helen and multitude of children), wanting to document the decline of civilization and the deprivation of the "have nots" in the HIGH-RISE. He, like Laing, sees chaos unfolding as problems develop within not only the societal hierarchy, but in the structural integrity of the building.

As Wilder sets himself up as somewhat of a revolutionary leader to the masses, Laing tries to remove himself from the fray claiming to be merely an observer. But how long can one observe before being swept into the tidal wave? As debauchery of every fashion takes hold as we see the fallout and fallacies of capitalism consume the residents. Deliveries of food to the in-house grocery store cease. Shelves are empty. Rotted food, if that, is all that can be found. Even the rich on the upper floors are feeling the pangs of poverty. Looting, plundering, pillaging and even murder become an hourly occurrence, as dead bodies are relegated to trash heaps. And while chaos reigns below, the upper crust still have their noses in the air with their French Revolution period powdered-wig wearing, champagne and cocaine laden parties that descend into the madness of Caligulan orgies while ABBA's SOS is being played by a string quartet in the background. SOS indeed. Could anything have been more prescient and metaphoric? I think not.

Tom Hiddleston is a dream...albeit hilarious, as he takes Robert Laing from prim and proper suit and tie to a drug and alcohol fueled drunken and dazed college frat boy with his antics. Elevating the character and the film's underlying commentary is the fact that everything Laing does is in the same suit and tie, but for one squash match. Laing is also the most fleshed-out within the script as a man who sees the world collapsing all around him but never learns how to adapt to it.

As Wilder, Luke Evans delivers a performance unlike anything we've seen from him. Evans digs deep, making all around Wilder believe him to be crazy, but the ravings are anything but. Evans creates an ambiguity that is intensely curious. Evans cuts an imposing figure, especially when cinematographer Rose dutches the camera POV.

Jeremy Irons as "The Architect" Anthony Royal is one sick bastard. Without giving away any spoilers, thanks to Wheatley's editing, we get some early hints as to who the real architect of the HIGH-RISE is, but it's Irons' performance that keeps everyone in check, believing what he wants, and needs, them to believe.

Stepping in as Helen, Elisabeth Moss proves interesting, but starts to wear a bit thin as the film progresses. Compelling is Sienna Miller who maintains a cloud of suspicion and intrigue throughout the film as Charlotte.

Playing against type is James Purefoy who is completely believable as a murderous nut job in the form of Pangbourne, one of Royal's henchmen and protective detail. There is, however, a nice arc and twist to the character that suits Purefoy perfectly. Fascinating is young Louis Suc who plays Toby, the introverted genius son of Charlotte. On the surface, Toby appears a token character, but as we see play out, such is not the case, yet Suc stays true to form as an unjaded child.

Adapted by Amy Jump and Wheatley, the duo stray somewhat from Ballard's prime directive in his novel; namely, the psychosis of classes in times of societal crisis. Jump and Wheatley make an effort to politicize HIGH-RISE more than the novel and with that in mind use it as a jumping off point for the film's visual tone which is far superior to the script itself. With a multitude of characters, many get the short-shrift - and while that works to an extent given the impersonal nature of "neighborhoods" in this day and age, as madness and mayhem take hold - it is disconcerting to see the seeming randomness of who survives and thrives and who lives or dies, given the entire structure of the concrete skyscraper both from a physical and metaphoric standpoint, has a deliberate design and purpose where nothing is random. The lack of clarity as to purpose and the many individual players serves as an odd disconnect that although it works within the grand scheme of the film, detracts from its otherwise excellence.

Wheatley excels with the construction and deconstruction of this microcosmic world thanks in large part to his cinematographer Laurie Rose whose imagery is celebratory in its use of light, framing and dutching. Rose creates a sense of a claustrophobic dystopia, yet contrasts that with sun drenched eye-popping color that is ebullient and expansive on the roof. Similarly, he makes great use of white on white; as it dinges and dirties, do does the visual grammar. Notably, where Bong Joon Ho used gimbals to create underlying metaphoric turbulence within "Snowpiercer" and its caste system, here, it's the frenetic camera work of Rose capturing the riotous acts of the residents. Fabulous hand held and I suspect a good bit of dolly work. Exciting is Rose's use of the tools in his cinematographer's toolbox, notably slo-motion hallucinations, vertigo-inducing pans and plummets over balconies (including a suicide leap) and intense close-ups of colorfully saturated gag-inducing conduct. Subtly interwoven into the fabric of the story and visuals is the kaleidoscope and all of its child-like beauty and wonder.

Gone are Wheatley's long patented visual standards, now replaced with the beauteous vibrancy of chaos which Wheatley and Amy Jump, serving also as co-editors, freely embrace, creating impactful sequences that although with beautiful photographic elements, often prove shocking or cringe-worthy. Stunning cinematic construction. Production designer Mark Tildesley soars with a free-flowing individuality for each of the residents and the common areas, staying true to the caste/class system while embracing Wheatley's retro 70's dystopian vision in his design (including shag carpet, albeit), which carries through into fashion, hair and make-up. 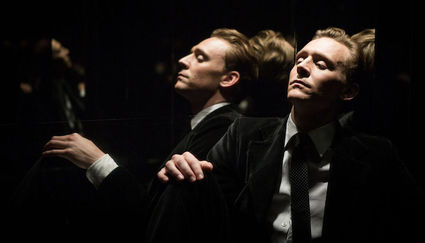 Odile Dicks-Mireaux costuming, while following through with the 70's and swinging 60's theme, also proves eclectic with metaphoric nods to the days of Napoleon and Josephine, an almost colonial servant note with Elizabeth Moss' costume, as well as that of a British hipster in Hiddleston's Laing and free-love Bohemian with Sienna Miller. We won't, however, talk about the velour sweat suits. *shudder*

Standout is Clint Mansell's scoring which blends period perfect songs with classical performance and arrangement, further fueling the absurdity of life within HIGH-RISE.

Playfully disturbing in a dog-eat-dog world where madness and mayhem reign supreme, HIGH-RISE is a luxurious and rich visual and emotional experience, elevating Ben Wheatley to the upper floors of the filmmaking hierarchy.

Written by Ben Wheatley and Amy Jump based on the novel by J.G. Ballard