Santa Monica business forced to close early. When will it end? 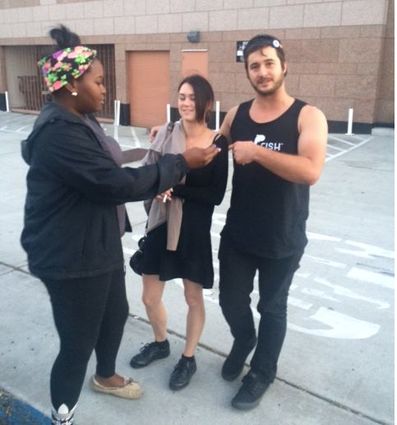 Mark Peters, Treanna and Jess used their "unfortunate time off as a team bonding experience."

The pizza dough was ready to be tossed; the fresh vegetables were ready to be diced and and the mozzarella cheese had already been shredded. Nevertheless, Dagwoods Pizza Parlor on Wilshire Blvd had to close early Sunday night, unable to take orders since the phone was down; unable to take internet orders, since their internet access was down, and unable to do business. Frontier was experiencing another widespread outage.

"It's a bad situation," said Dagwoods manager Mark Peters. "We can't take orders, and this is our big night of the week! We're really bummed out about the whole situation. I don't know if they (Frontier) realize that this has the potential to destroy small businesses."

Update 5/30 12:48 PM PST: "Frontier did send a technician out this morning and got our phone lines and internet up and running. Business is running smoothly as usual now." --Mark Peters

Last week, Frontier's representatives before a hearing for the California State Assembly Committee on Utilities and Commerce to talk about the issues and according to the LA Times, Frontier has pledged to resolve a backlog of problems within the next 10 days. 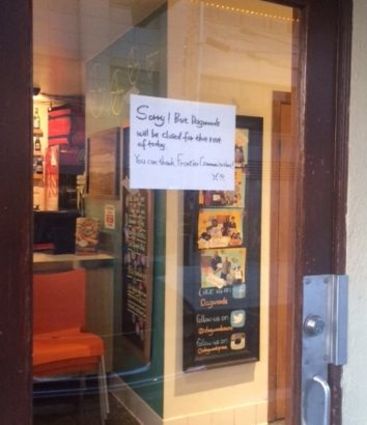 Sign posted on the door at Dagwoods Pizza in Santa Monica.

Matthew "C", who oversees the central office of Alcoholics Anonymous in Ventura County, was quoted as saying his office's phone lines have been working only intermittently since Frontier took over.

"This is a big problem," Matthew said. "These are 24-hour hotlines and we get calls from people who need to detox as well as people who are at their wit's end."

He said he's spent hours on the phone (mostly on hold) trying to fix things.

What outages have you experienced? Please let us know through our blog comment lines and e mail. And we'll post it here--that is, if we can get online!