Do Fish feel pain? Do lobsters suffer trauma from domestic or urban captivity?

A Call For Socio-Taxonomic Equality and Justice 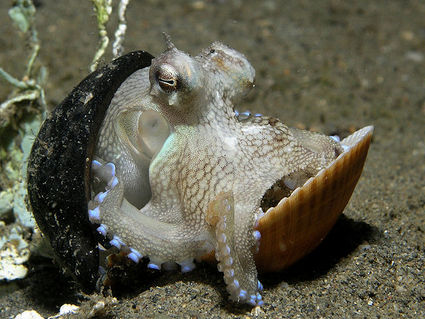 This octopus has acquired half a nut shell and half a mollusk shell for a removable, temporary shelter (an example of tool use in the 4-centimeter invertebrate.)

As science continues to delve into the depths of Earth's taxonomic soup, an increasing amount of evidence suggests we are not the only people on the planet. For centuries, humans have held the conviction of our uniqueness to be sacrosanct.

We claimed it was our intelligence, our self-awareness, or our capacity for martyrdom that differentiated us from the mass of claws and fangs that writhed mindlessly beneath our shoes, the "wild beasts" trapped in an evolutionary back alley. Modernly, however, the backbone of this conviction is dissolving. Researchers have documented that "higher life forms" such as primates and whales organize complex social systems and utilize advanced cognitive abilities to perpetuate cultures and succeed in laboratory tests of memory (sometimes better than humans.) <

Let's start with the question of sensation. Most restaurant customers would object to the plunging of a trembling live puppy into a pot of boiling water while his or her canine companions looked on. The sounds of the drowning, burning creature would snip most heartstrings like the threads of life between the blades of Fate's scissors. Hopefully, that restaurant wouldn't last long.

Conversely, many seafood lovers today think nothing of patronizing a restaurant that keeps lobsters, live in tanks at close proximity to one another, to be selected by customers for a wide-awake scorching and drowning, despite the "bloodcurdling shriek that results." <

This human serenity may be knocked askew when crustacean connoisseurs read about research conducted on prawns at Queens University. Prawns, smaller and "simpler" cousins to the table lobster, were found to react Lady-Macbeth-style when vinegar was rubbed onto their feelers. The creatures spent, according to Robert Elwood's study, about five minutes rubbing at the acidic substance, much as a puppy would shake his head to shake off the sting from a burst soap bubble in his eyes.

If arthropods such as prawns, lobsters, and perhaps their land relatives the spiders and flies can feel physical agony in the same way humans do, maybe it's time to rethink some of the practices we engage in to make use (or short work) of these beings.

For example, I myself constructed fruit fly traps last winter to rid my room of crumb-loving moochers. Maybe the animals suffered due to being enclosed in a plastic container with limited air and nutriment, and from later being dumped into a trash can, heaved onto a truck, and transported to the ever-growing landfill.

Furthermore, maybe they experienced psychological distress, drifting through the soggy banana-vinegar air and tapping lethargically at the invisible walls that held them in claustrophobic confinement. (This is all speculation; I have not interviewed any of my arthropod prisoners).

Am I projecting? Perhaps. It's possible that the fruit flies enjoyed their brief respite from the harsh outside world.

Regardless, additional evidence is cropping up everywhere that small and taxonomically belittled creatures have nuanced cognitive and emotional abilities.

Take the talent of facial recognition, for instance. Humans are often credited with having developed an advanced social structure and consequently the most abstract visual system in the animal kingdom for placing faces. It is true that human babies can tell the difference between an image of their mother's face and that of a stranger. <

They also demonstrated facial recognition in the three-dimensional world: when Dr. Cait Newport brought unfamiliar humans into the lab, the fish "act[ed] skittish" and revealed their clear preference for Dr. Newport by spitting directly at her eye. This suggests the fish can translate abstract rules to new situations, and maybe that they have social cognition similar to human babies, complete with the need for the reassurance of "mom." While human survival obviously benefits from pinpointing one's personal security official early in life, these fish were able to learn a non-evolutionary, unconventional reward pathway between these faces, unrelated to anything they would need to distinguish between in their natural habitat, and a reward distributed by humans for performing that task.

We have seen that life forms across many branches of the genetic tree demonstrate sensation and perception more refined than was once thought. What other, deeper connections might all earthly creatures share?

Sometimes, research to test animals' stunning intelligence produces some questionable outcomes for the animals themselves, especially in light of their abilities to experience pain and to identify caretakers.

For instance, it has long been known that octopuses sacrifice their lives for the next generation, but lab studies to investigate this phenomenon more closely led to probable suffering in the noble (involuntary) subjects. Here's what we already knew: After the male transfers his sperm cells into the female's mantle (sometimes losing his mating arm or his life in the process; some species hold a cannibalistic matriarchal tradition),<< http://www.bbc.com/earth/story/20150223-mysteries-of-cannibal-octopus-sex>> the female presides over the eggs (up to 53 months<

She never leaves the cave – Dad's absent or in her digestive tract, and the eggs must be aerated, kept clean and protected from predators. Even if nutritious crustaceans creep across the walls within reach of her famished beak, she simply brushes them away to avoid any chance of harm to the eggs. She doesn't pass a moment or a drop of energy on her own well-being.

When the eggs finally hatch, the mother dies almost immediately. Some biologists believe that she dies of hunger, but some recent probing suggests that a gland is predetermined to release an instant-death hormone<

To test this theory, one experiment removed the gland from a behind a female's eyes, and watched as she diligently cared for her eggs for months and remained alive for months after they hatched, too weak to leave her dwelling and hunt, until she finally died of starvation. If she had left her den, she may well have been torn apart by predators, too low on energy to flee or defend herself. This can be a lengthy death as the soft creature passes from jaw to swarm, internal tissue spilling out from her torn mantle like the down of a ripped pillow.

Whether the modified mother dies of slow starvation or becomes an emaciated meal for others, it is plain to the lay-observer that such research inflicts incredible stress on the animal, which has no rights or ability to give informed consent to such a procedure, nor can its communities rise in protest. Thankfully, some humans have objected on behalf of the sentient, tool-using, progeny-loving cephalopod, establishing new laws in some countries forbidding such a practice. 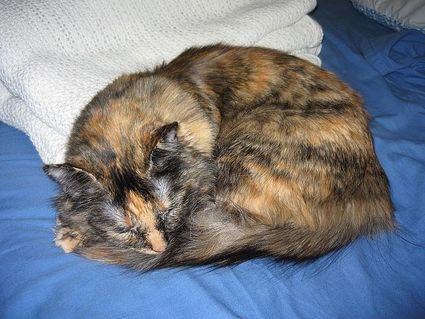 Cats have complex social needs, including a balance between refreshing solitude and times of connection with their families (regardless of what species make up the pride.)

Even if a specific law is enacted to protect some animals from some abuse, it is apparent that overall attitudes towards all creatures, including the seemingly primitive ones, are due for a revision. What else about these animals might still lurk in the reaches of nature unknown to science? Maybe they suffer trauma from domestic or urban captivity that is not well-informed.

Maybe they shudder with agony from being trapped in a room full of blank-faced people who can't see that the animals need an introvert's rest from human company. Maybe creatures even construct plans for the future, including empirical experiments to conduct on their longtime oppressors. We must not project our own fantasies onto other living things, but it is imperative that we research, keep, utilize and breed them in light of common sense, compassionate intuition, and current, ever-expanding knowledge of their complex abilities and needs. Just like humans, they can feel, suffer and even love a member of another species, if given the chance.