Has been wearing women's clothing for years; now he plans a surgical transition to female. 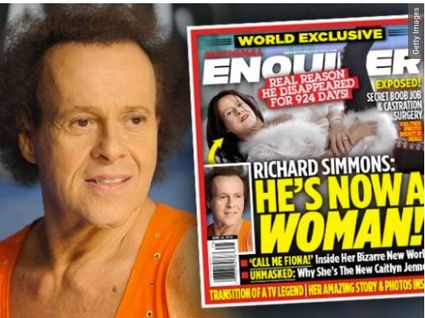 Update: 6/8/16 The National Enquirer, which has broke many stories in the past, reports that Richard Simmons is transitioning to be a woman. In a front page article entitled "Richard Simmons secretly living as a woman named Fiona," the article reports the "shocking news" that the athletic exercise guru, believes he is a woman trapped in a man's body. At home, he puts on women's clothing. Then hangs around in bars. Yes, he's a lumberjack, but he's OK.

Like Jenner, Simmons has decided to undergo surgical male to female sex reassignment surgery--breast implants, chin implants, cheek implants, butt implants and naturally, estrogen injections. He -- I mean, she -- has ventured out of his Hollywood Hills home from time to time over the last several months as Fiona, his soft spoken alter ego, to look for love. As any single woman might.

So now, no doubt, instead of reporting that he is emotionally unstable and bizarre, the U.S. press will begin to describe him as a hero. Last year, Jenner was the first Woman of the Year recipient ever to have a penis. In a few days, everyone on MSNBC will begin to laud Richard -- err, Fiona Simmons' courage, rather than his curiosity. Welcome to 2016, folks.

An ambulance took the 67 year old exercise guru to Cedars-Sinai Medical Center just before midnight, after one of his roommates called 911. Paramedics, impressed by the extent of his madness, decided he need to see a doctor. TMZ said Saturday.

TMZ didn't know whether or not Simmons had been released. Simmons himself called Entertainment Tonight, however. He told them:

"This is how I want to live my life right now. To all the people that are worried about me, please don't be. If I was in any trouble, if I was hurting in any way, I would reach out. It is time right now for Richard Simmons to take care of Richard Simmons."

Simmons also called Entertainment Tonight when the "Dance Your Pants Off!" purveyor told The New York Daily News in March, that they feared he was being kept at home against his will by his live-in housekeeper, Teresa Reveles. He told ET that the report was "very hurtful" in a phone interview.

"This is how I want to live my life right now," he said. "And to all the people that are worried about me, please don't be. If I was in any trouble, if I was hurting in any way, I would reach out. It is time right now for Richard Simmons to take care of Richard Simmons."

He reiterated his stance a day later to the "Today" show's Savannah Guthrie.

"I just kind of wanted to be a little bit of a loner for a while," he said over the phone. "Right now I just sort of want to just take care of me."

"You are so loved! You aren't obliged to be happy or strong right now," one fan wrote. "Do what you want or have to do for you!!!! None of us know what you're going through, but we would do anything to make it easier." 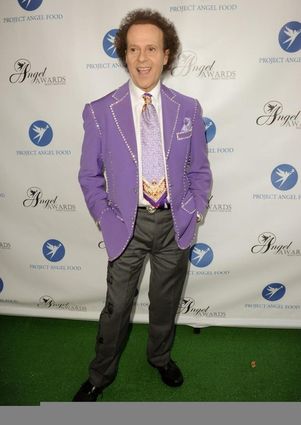 Simmons faded from the spotlight in recent years, as one might expect for an aging exercise maven. At his age, Jack LaLane transitioned to swimming to Catalina, towing a boat in his teeth. Indications are that Richard Simmons is also transitioning, but in a different direction.