Police say Kevin James Loibl planned Killing Spree, but killed himself when her brother tackled him 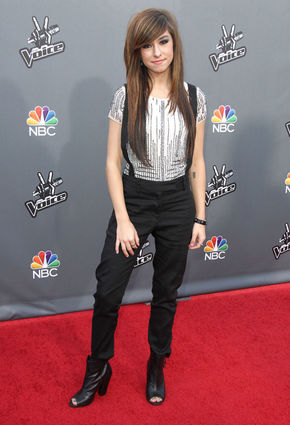 Christina Grimmie performing at The Voice in 2014. UPDATE: According to an ORMC employee who prefers to remain anonymous, Grimmie passed away shortly after being brought into the ER.

She died at 22 while signing autographs after a concert. The senseless killing of Christina Grimmie in front of fans, her band and her brother, shocked Orlando Florida and the Nation later Friday night. The singer was pronounced dead when she arrived at the emergency room.

At 1:15 a.m. EST Saturday, Christina Grimmie died as a result of gunshot wounds. According to an anonymous intern at Orlando Regional Medical Center (ORMC), Grimmie passed away shortly after being brought into the emergency room. Kevin James Loibl shot himself and is also dead.

Friday evening June 10, 2016, Grimmie was shot by Loibl following a Before You Exit concert in Orlando, Florida. Grimmie and the band were signing autographs when the assault occurred. Police reported that she was in critical condition.

Grimmie's brother tackled Loibl after shots were fired. He then shot himself. Police told local TV Saturday that based on an examination of his cell phone records, the still unidentified gunman intended to kill many more people. He had two loaded hunting rifles with full clips of ammunition, and a hunting knife. The Plaza Live concert venue has no metal detectors, and has a capacity of 100.

Loibl kiled himself apparently because Grimmie's brother "immediately tackled the suspect. This stopped him from causing any more harm to Christina and her fans. During the struggle, the suspect shot himself. Loibl was pronounced dead at the scene....Her brother is a hero for saving and stopping him from not hurting anyone else," said Police.

Orlando Police Department public information officer Wanda Miglio added police are unsure where on her body she was shot, or how many shots were fired. Officer Miglio said a motive is unknown. Given that Loibl killed himself, it is possible a motive will never be known.

"The investigation is in its preliminary stages," said Miglio, "We know Christina is a talented young artist and that her fans and supporters want as much information as possible."

Grimmie's representative said in a statement, "It is with a heavy heart that we can confirm that Christina has passed and went home to be with the Lord. She was shot at her show in Orlando and, unfortunately, didn't survive the gun shot wounds. We ask at this time that you respect the privacy of her family and friends in their time of mourning. If you'd like to give back to Christina's family in her memory, please consider donating to the families GoFundMe page in their time of need."

The Plaza Live Theater cancelled all events and issued the following statement: "The board and the staff at The Plaza Live Venue are deeply saddened by the tragic events of Friday evening," the statement read. "Our thoughts and prayers are with the families of those lost as well of those who witnessed and aided in the recovery after this senseless act."

After news of Grimmie's hospitalization, The Voice tweeted, "We are heartbroken. @TheRealGrimmie is a loved member of our family. Our thoughts are with her and her family. #PrayForChristina."

Levine also posted a photo of himself with Christina. He tweeted "I'm sad, shocked and confused. We love you so much Grimmie. We are all praying hard that you can pull through this...this just isn't fair."

Christina Victoria Grimmie, (born March 12, 1994), known on YouTube as zeldaxlove64 was an American singer-songwriter known as a contestant in The Voice and for her covers of hit songs by contemporary pop musicians. In June 2011, she released her debut EP, Find Me. In June 2012, she told a reporter that she wanted to stop doing covers and start writing only original music.

In 2014, Grimmie participated in Season 6 of NBC's singing competition, The Voice and finished in third place. Adam Levine, her coach on the show, announced in the finale that regardless of the results, he would sign Grimmie to his label, 222 Records. Justin Bieber and Lil Wayne also supported Grimmie on the show and Lil Wayne offered to sign Grimmie on his label, Young Money Entertainment. She signed to Island Records, for a short time before being dropped by them.

Grimmie grew up in Marlton, New Jersey where she attended Cherokee High School. She was of Italian and Romanian descent. Her father noticed her talent for singing when she was six years old and she started playing the piano at age ten. Despite having received piano lessons, she said she plays by ear. In a number of her videos and interviews, Grimmie identified herself as a Christian. Grimmie was homeschooled for her junior year in 2010.

Grimmie auditioned for Season 6 of NBC's singing competition. During the Blind Auditions, she performed Miley Cyrus' hit song "Wrecking Ball". All four coaches, Adam Levine, Usher, Shakira, and Blake Shelton, turned their chairs for her, and she opted for Adam Levine. She finished in 3rd place, behind winner Josh Kaufman and runner-up Jake Worthington.

People Magazine says this morning: Christina Grimmie, who was shot and killed at her Orlando, Florida concert on Friday, may be best known for making the final three on season six of the Voice, but before she was representing Team Adam Levine, the 22-year-old singer made her name on YouTube.

She was discovered on the global video-sharing YouTube in 2010, and it was her cover video for Miley Cyrus' "Party in the U.S.A" that got her signed to her first management agency. The clip now has garnered about 12.2 million views since it was first uploaded in 2009. We have embedded it on this page.

Was her killer a spurned lover, an obsessed fan, or simply some nut with a gun? We may never know. But one thing is for sure. Christina Grimmie joins a long list of talented young entertainers, who died long before their time. God must have one hell of a rock band in heaven.

Miley Cyrus' Party in the USA sung by Christina Grimmie has 13million hits on YouTube.

From the Orlando Weekly: http://www.orlandoweekly.com/Blogs/archives/2016/06/11/christina-grimmie-of-the-voice-shot-at-the-plaza-live

Just to let you know, the photo you've used (at the time of writing this comment) is of the Italian singer Cristina Scabbia.