Islamic Connection: Some Suspects in Dallas Shooting Sympathized with the Nation of Islam

Suspect "Micah X. Johnson" is named after Malcolm X, a Member of the Nation of Islam 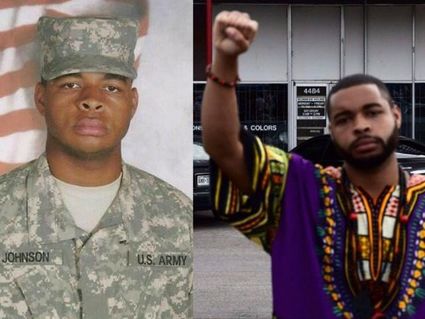 Micah X. Johnson in a dashiki with the black power salute, and in a green beret outfit.

On July 7, 2016, five police officers were killed by sniper fire in Dallas, Texas. Six other officers and two civilians were wounded. A shooter fired at a protest against police killings in the aftermath of the shooting deaths of Alton Sterling and Philando Castile. This is all generally known.

Among the five suspects now in Dallas Police custody are self described "Islamic Americans" who attended a Nation of Islam mosque in the South Dallas area. It should be noted that the Nation of Islam itself is splintered into several groups. Louis Farrakhan, who took over the organization in 1981, subscribes to Dianetics and appears to have left Islam altogether. It's ideology is barely recognizable as Islamic.

Johnson liked the Nation of Islam, African American Defense League, Black Riders Liberation Party, the New Black Panther Party, and other black nationalist groups on Facebook, and identified himself as a "Black Nationalist." He wears a dashiki in his profile picture, and holds his fist in the air like a Black Panther. "Don't let this white man tell you that violence is wrong," tweeted Farrakhan about an hour before the Dallas shooting. Johnson was one of his thousands of Twitter followers.

The night he died, Johnson told Police he was upset about recent police shootings and 'wanted to kill white people, especially white officers.' He is the only suspect Dallas police have publicly identified so far, and also the only dead suspect. He is also now identified as the only shooter (but not the only suspect).

"We cornered one suspect and we tried to negotiate for several hours - negotiations broke down, we had an exchange of gunfire with the suspect," Dallas Police Chief David Brown said. "We saw no other option but to use our bomb robot and place a device on its extension for it to detonate where the suspect was," he said.

Using a robot to kill a sniper is a procedure never performed before by American police, but common in fighting Islamic insurgencies. In a tweet, defense expert Peter Singer noted that the MARCbot machine, which is designed to tackle bombs such as IEDs, has been used as a weapon in Iraq.

At his Mesquite home, police found guns, bomb making materials, and a personal journal of combat tactics. He is described as a loner who spent six years in the Army Reserve, including a deployment to Afghanistan. Johnson had no prior criminal history. But he had clearly been planning a mass shooting for a long time.

No recognized American Islamic leader publicly promotes violence, though some claim the Nation of Islam is an exception to that rule. However, members of this particular Mosque might reasonably have believed that they themselves were under attack.

A tense, armed protest in front of a South Dallas mosque required Dallas police intervention one Saturday afternoon in April. It happened in front of the Nation of Islam mosque on April 3, 2016, according to CBS Dallas.

Anti-Moslem demonstrators, dressed in fatigues and masks and most of them armed, were easily outnumbered approximately 10 to 1 by the mosque supporters, some of whom were also armed, reported CBS Dallas. http://www.cbsnews.com/news/anti-muslim-protest-in-dallas-features-fatigues-masks-lots-of-guns/

Dozens of police officers stood in between the two groups and also on rooftops to ensure nothing more than words were exchanged.

In a statement released before the April protest, the Dallas Police Department said, "The department is committed to protecting the Constitutional rights of all citizens and will make every effort to keep this protest peaceful."

The was no violence and no arrests. But the seeds of anger and dissent were sown.

Militant Islam Reaches America is a book written by historian Daniel Pipes, published in 2002. It focuses on Islamic fundamentalism and Islamism, reflecting Pipes' view that, as he said in 1995, "Unnoticed by most Westerners, war has been unilaterally declared on Europe and the United States." The latest shooting in Dallas appears to have been a part of that war. 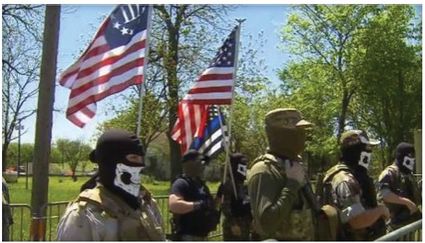 Anti moslem protest in front of the Mosque on April 3.

The protest was organized by the Next Generation Action Network after the killings of two black men, Alton Sterling and Philando Castile, by police in Louisiana and Minnesota, respectively. It was one of several protests held across the U.S. on the night of July 7. Several hundred protesters were involved in the Dallas protest, and before the shooting occurred, no other incidents were reported and the event was peaceful.

Belo Garden Park, the location where the protest began and near where the shooting occurred, was a popular gathering place for Black Lives Matter demonstrations, such as one held after the death of Sandra Bland at a Waller County, Texas, jail in 2015.

The people firing on the Dallas police used another group's protest event, to settle what they saw as an offense against their race and their religion.

Musahmed,you need to get your facts straight as well.... Baptists don't go to Mass, and they don't follow the Pope. Catholics follow the pope, and Baptists go to services. Ho

And beside even if he was named after, or in like Malcolm X, I am sure he didn't name his self stupid. Stop spreading hatred and false propraganda. Signed Malcolm (X)avier

Does this guy do any research? He's all over the place. His article is riddled with distortions and frankly his editorial staff was asleep at the wheel. Malcolm X was not a founding member of the nation of islam. Malcolm X was born Malcolm Little in Omaha Nebraska on May 19,1925 which would've made him 9yrs old when the Nation of Islam was founded in 1934. He says that the members/suspects attended a sunni islamic masjid which is the equivalent of southern Baptist parishioners attending mass and taking orders from the pope. Can I take this guy serious when he makes mistakes like these. I think not.

This video provides all the evidence anyone could ever need to understand the nature of Louis Farrakhan and his call for the murder of white people.. Hear him say it for yourself Scroll to 2:25 to save some time if you want.. what he says is absolutely shocking. https://www.youtube.com/watch?v=yr7Q9KzjBKg

What's the matter with you? Malcolm X was not a co-founder of the Nation of Islam, Master Fard Muhammad was. The shooter's middle name is Xavior...no relation to being given an 'X' while learning a knowledge of self like Malcolm X and Cassius X (Muhammad Ali). Minister Farrakhan does not teach violence and his followers carry no weapons of any sort. Your article sucks as it's clear you're only trying to smear the good name of the Minister. The only connection here is between you and stupidity.

The man's middle name is Xavier, hence the reason for the X. Idiot!

WOW talk about uninformed article. You may find it interesting to note that the Nation of Islam is listed as a domestic hate group by Southern Poverty Law Center.

You might do a little homework, unless, of course, your perspective here is pure spin. Louis Farrakhan, in fact, one year ago openly advocated the mass murder of whites and law enforcement officers, calling for “10,000 fearless men” to “rise up and kill those who kill us.”

Farrakhan is constantly calling for violence. This is garbage journalism at best.