A sex-positive, coming-of-age story about a sexually-ambiguous teenage girl who decides to have sex for the first time. 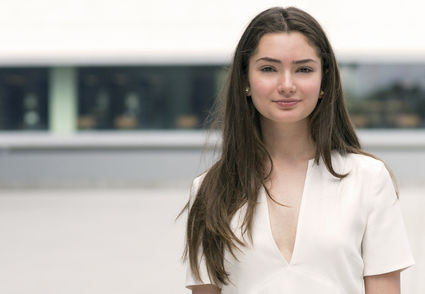 The Santa Monica Observer was privileged to interview seventeen-year-old filmmaker, Emily Robinson (known for her role as Young Rose on the Amazon TV series, "Transparent"), to discuss her new short film, "Virgin Territory". The film premiered to wide acclaim on June 2, 2016, at the Los Angeles Film Festival, and will also be screened at Outfest LA as part of the "Girl Shorts" short-film series, on Friday, July 15, 2016, at 9:30 PM, and Sunday, July 17, 2016, at 3:30 PM, at the Director's Guild of America in West Hollywood. Advance tickets for both screenings are already sold out, but standby tickets may be available (see "www.outfest.org" for more information).

"Virgin Territory" is a sex-positive, coming-of-age story about a sexually-ambiguous teenage girl who decides to have sex for the first time with a randomly-selected teenage boy in order to better understand her own sexual orientation. Emily Robinson wrote, directed, and stars in the film. It also stars Michelle Clunie ("Queer As Folk") and Mel Shimkovitz ("Transparent").

OBSERVER: Let's start at the beginning. How did you get into acting?

EMILY ROBINSON: First, I started modeling because my neighbor on the East Coast was a model, and she brought my pictures into her modeling agency, Ford, without telling my parents. After I started modeling, I came home one day and said, "I wanna act." So, I started commercials and theater and things that you do in New York when you want to start acting as a kid. I started doing episodics and my passion for acting grew, and I was extremely lucky I had supportive parents who are both retired. They were like, "Yeah, let's do this!"

OBSERVER: You had a big break in 2014 with a role on the Amazon TV series, "Transparent". How did the road lead you from there to "Virgin Territory"?

EMILY ROBINSON: Working with Jill Soloway, who is the showrunner/writer/creator/director for "Transparent", was a huge inspiration for making the short, because she's so empowering, inclusive, and creative, and she is very big with helping nurture female filmmakers. Being surrounded by her and so many filmmakers who inspired me made me want to tell stories that we weren't seeing that I wanted to see in the world. So that was the groundwork that got me here.

OBSERVER: What was the evolution of the screenplay for "Virgin Territory" from the hashing out of the idea to the final draft?

EMILY ROBINSON: It changed a ton. It started off with the characters. I knew I wanted the film to be a sex-positive, coming-of-age story. And then, as we were writing it, we did two unofficial table reads with two other actors and myself, and there was one moment in the first draft [concerning sexual ambiguity] that we all fell in love with, and we wanted to push it a bit more. I think we all realized that I'm one of the few people who could tell a story like this, and not exploit it because, when I was writing the script, I was a sixteen-year-old girl, and the film's about a sixteen-year-old girl, so that was an empowered state to be in as a first-time filmmaker. It just gives you freedom to try anything. So we started experimenting with this question of sexual ambiguity, queerness, and all that.

OBSERVER: Was there any point in this story that you had cast a male character? We see your character texting and interacting with a boy, but we never actually see him.

EMILY ROBINSON: No. A male character was never cast. At one point, there was a question of whether or not we were going to see his feet/his legs walking. But at the end of the day, I realized I did not want him to be shown because the film's not about him. I wanted it to be about my character and her journey.

OBSERVER: Was the film at all autobiographical?

EMILY ROBINSON: It's not autobiographical plot-wise at all. But the conversations held and the topics brought up in it are definitely personal and relevant to myself and many people.

OBSERVER: In "Virgin Territory", you spend a lot of time in the film talking to your mom about where you are emotionally, what you want to do, and that you want to have sex. Certainly when I was growing up in the 90s that never would have happened! Is it the case today, in your generation, that these types of conversations are more common?

EMILY ROBINSON: I would guess that they are more common. I have friends that have that type of relationship with their parents and I know other people that are like, "Are you kidding? I would rather die!" So I think that it is still person-dependent, but I am hoping that we are starting to get rid of the taboo that's surrounding sex because it will make life easier and shame less present.

This is especially true with girls, because I think with guys it's like, "Oh yeah, he's a stud!" With girls, well they could be dating someone, but if there's any rumor that anything else is happening, then people think, "Oh well, she's a slut!" And then you slut-shame her and you put the boy on a pedestal, and say, "Oh yeah, well, he's getting some action, oh but, that girl, she gets around!" So I think that opening discussions will hopefully help stop this injustice.

OBSERVER: So you made this short film and are showing it at a couple of festivals. After that, how do you plan to get this message out to the target community that you want to actually see this movie, which I assume are people somewhat around your age who may be dealing with a similar situation?

EMILY ROBINSON: Yeah, it's definitely difficult. Right now, we are starting with a festival run, which is really exciting. So hopefully whoever is seeing it, even if they don't like it, it will start a conversation with them.

Already, we've had a great response. I'm thinking of this one girl in particular who went to boarding school in the middle of the country and was feeling isolated and had a few friends that were feeling the same way when talking about sexuality as a spectrum and open feelings, and not necessarily knowing if anyone else is feeling that way. She and I had a really lovely conversation, and she said, "I'm just so happy to know that projects like this exist because just knowing that it's out there makes me feel less alone." Which is obviously something you want to hear as a filmmaker... it was really touching. So I'm hoping to put it out online on Youtube or Vimeo once it's done its festival run. That's the plan.

OBSERVER: We were very impressed by you because at the age of sixteen you had a vision for a short film and decided to go for it and make it. Many people spend years and years studying about how to make a film. You just did it.

EMILY ROBINSON: It was really important to make the film when I made it because, if I had the knowledge of every little detail that went into making the film but had not already done it, I would have been so much more terrified! Even though you always know that there are a million things that go into it, and being on the acting side you see that it is crazy and overwhelming. But I do think that there is this fear that we build up where it's like, "Yeah, but what if I don't do it right?" There are so many pressures that you can put on yourself.

But now you can tell stories so much more easily than before. There are movies now like "Tangerine" that are absolutely beautiful, and they are shot on iPhones with an app and lenses. So it's much more doable now. And I think that it's such an overwhelming but exciting time for content because there is no excuse to not make something. So many times you worry about making something absolutely perfect, but at the end of the day there is always going to be something that you wish you could change or go back in time and fix. If I wanted to make this film now, there are absolutely things I would do differently. What's important regarding my short is that it represented a moment in time when I wanted to make that film and this is how I wanted to go about making it.

OBSERVER: How was your experience using Kickstarter to finance part of your film?

EMILY ROBINSON: It was overwhelmingly positive. We did it after the fact for post-production because we knew that we wanted to do a Kickstarter campaign, but I didn't want to wait for that to make this movie. The goal was to raise $6000 for post and help with the festival process. We reached our goal within five hours and then, by the end of the month, we had reached over $17,000, and then another producer came onboard. And the rest is history. So, it was overwhelmingly positive. Kickstarter was really supportive of us and featured us. We were able to find people that weren't family friends and weren't following me. We were able to find an audience.

OBSERVER: That's amazing. Where was the film shot?

EMILY ROBINSON: At my apartment. I designed my room for it.

OBSERVER: Who did the cinematography?

EMILY ROBINSON: Kay Madsen. He's fantastic. He's from Germany. We weren't sure how to go about interviewing DPs. This film I did by myself. I have literary representation now which I am in love with, but I did not have that before. This was a family production. My dad was the scriptie and my mom was our producer. So we went onto Craigslist. We had seventy-six people apply and I think I interviewed twelve. And we picked Kay. Kay has a classical background and he always tried to find the most perfectly traditional shots, and I was the untrained eye who was like, "Yeah, but what if we cut off her head for half of the scene?" So it was that back and forth that got us where we are, which I think was really important. So we met via Craigslist, like all good relationships!

OBSERVER: I assume that you have a manager and an agent. Did they have a hand in any of the casting or any aspects of the script? 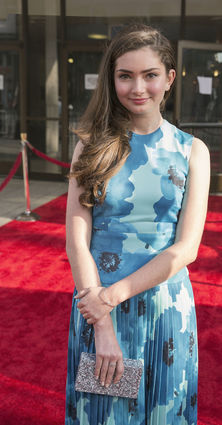 EMILY ROBINSON: No, I made this on my own. This was one of those things where I thought, "I want to do this. And I don't want anyone to tell me I wasn't going to do it." So I kinda just made it and right before we filmed I was like, "Oh, just so you know, I'm making this." I sent my manager and agent the script and then I made the short and showed it to them. It was a very positive reception and once they saw it, they were completely on board. They said, "This is great. Let's do more with this."

OBSERVER: Now that you've made a short-film, do you consider yourself more of a filmmaker than an actor?

EMILY ROBINSON: I'm still serious about acting, but now I have all of these things. It opens up a different world, which is cool and exciting.

OBSERVER: Best of luck with "Virgin Territory". I'm looking forward to seeing more of your films in the future.