Down to the Sea: Anemone Clone Wars and Friends With Benefits

Growing up, I thought the terrestrials around me were weird. But Sea Life is Even Weirder 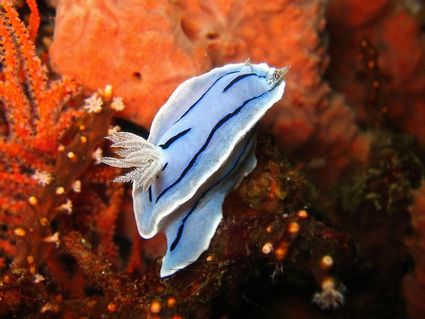 Growing up in Santa Monica, California, I thought the terrestrials around me were weird (think dates at e-cigarette bars and living tin men collecting coins on the Promenade.) But it turns out, the real weird characters don't start showing up until you grab your goggles and take a dip in the water. Whether it's off the So-Cal shore, or on a Sulawesi reef; whether you prefer your agua dulce or with extra salt, you're sure to find animals with extreme, and sometimes comical, adaptations (disappointingly, though, sponges haven't evolved pants.) Here are ten specimens to examine.

Female dolphins in Shark Bay, Western Australia, have been inserting their bottle-shaped noses inside the holes of a torn-off piece of sea sponge (phylum Porifera) before rooting around on the rocky, sandy bottom. The sponge protects the dolphin's face from nasty cuts while searching for optimally nutritious fish, which live beneath the sediment. While mothers teach the tradition to their daughters, few male dolphins seem too wary of attaining a more rugged-looking nose. Maybe the scraping rocks help them shave their stubble.

If I asked you to guess which fish was responsible for the most diver attacks on Australia's Great Barrier Reef each year, the white damselfish would probably be far from top of mind. This herbivorous, double-chinned gardener cultivates a patch of algae for its own farm-to-table fare, and it doesn't want jealous city folk getting too close. If a diver accidentally encroaches on the damselfish's territory, the fish will dart threateningly in the person's face and intimidate him or her with a series of loud clicks, reminiscent of a swimming Macintosh computer mouse from 1992.

Anthopleura elegantissima, commonly called the aggregating or clonal anemone, organizes its colonies into ranked battalions to conquer the rocky intertidal zone (millimeters at a time.) The front line is occupied by soldiers, equipped with specialized stinging cells that stick onto the tentacles of their adversaries. Scouts slip in between the ranks, trying to detect an approaching enemy and alerting the big guns. In the back of the pack huddle the reproductive factories whose only purpose is to clone themselves and churn out more recruits. Each member of any given army contains identical genes, and if a scout returns from a mission covered in too many stinging cells from the opposing clan, the scout's own clones often mistake it for an enemy and kill it.

Not all sharks are big and deadly enough to feature in a horror movie. For instance, California's swell sharks and horn sharks, hatched as 6-8-inch (15-17 cm) pups, only grow to about three or four feet (1-1.2 m). Members of these oft-oppressed species stick together, often sleeping in dogpiles on the shallow seafloor. A theory has been advanced that they intend to trick larger predators (including bigger sharks) into thinking these multiple sleepers are all one large animal, too big to attack. Another possibility is that the mini man-eaters just like to snuggle.

Sea otters are the only marine mammals that don't use blubber (fat stores) to keep their bodies insulated from cold water. Instead, they carefully groom their fur, keeping air bubbles trapped between the layers of follicles and thus retaining heat. Baby sea otters are born with thick fur that automatically soaks up air bubbles so voraciously they end up floating at the water's surface like kids on inner tubes. After their mother teaches them to swim and dive, they'll be able to lose some of that hot air.

The barnacle goose builds its nests high atop Arctic sea-cliffs, far from danger and from food. These babies aren't coddled – at just a few days old they must tumble, flightless, from 400 feet (120 meters) above the rocky feeding grounds where their parents wait, cheering them on. Goslings that manage to cushion their vital organs from the rocks using their soft down and fat bellies get to eat grass with their moms and dads. The sweet reunion isn't the end of their terrors, either – predators such as Arctic foxes await the dazed, vulnerable young with their mouths watering.

Nudibranchs are brilliantly colored, soft-bodied animals seen meandering across coral platforms or dancing through the tropical shallows like a disembodied shawl. The adult form we see doesn't have a hard shell, leading many laypeople to call nudis "sea slugs." Nonetheless, these animals are more closely related to snails. Their ancestors exchanged the clunky shell for translucent spears on their backs, powered by the stinging cells of the jellies they eat. (Now these nudis can't even decide whether they're snails, slugs or jellyfish!) 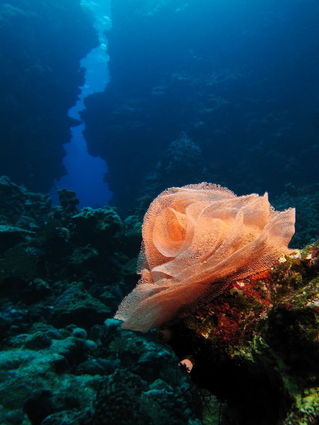 Nudibranchs, which are hermaphrodites, lay "egg ribbons" or doilies attached to a stable underwater surface.

Diatoms are one of the most important producers in the world ocean, converting up to 25% of available carbon into sugar and powering marine food webs. These microscopic cells are basically silica boxes – a lid and an underbite that fits neatly inside– containing globs of oil to prevent excessive sinking between currents. When the cell dividse, the box opens. Then each half of the mother cell's box becomes the new lid of the daughter cell, which grows a new, smaller undercarriage beneath. Through this process, each generation gets a little smaller, until the tiny great-great-granddaughter cells must resort to auxospores and sexual reproduction to restore the family stature.

10. The Soft Side of Hermit Crabs

The blueband hermit crab thinks nothing of snatching kelp morsels out of a younger neighbor's mouth or playing tug-of-war with an empty shell (or even one that is still inhabited!) However, during the breeding season, males will pick up their lovers and carry them like sultans for a day or more. Perhaps the baby blue manicures on these males' dainty legs betray the itch of romanticism cohabiting that weather-beaten shell.