Toxic Algae Blooms Sicken Humans, Can be Deadly to Dogs 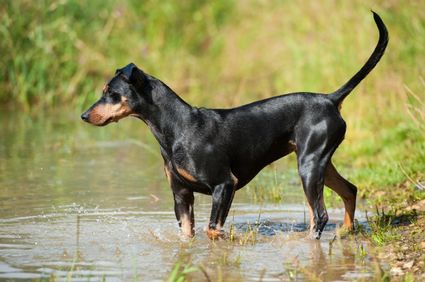 Blue green algae blooms can be deadly for your best friend.

It may seem like a great idea to take the whole family, including fuzzy Bowser, for a nice cool dip in a local lake, but if there is blue green algae blooming, Bowser might not make it home again.

Exposure to the blooms can cause rashes, headaches, eye irritation, or gastrointestinal upset in humans, but for dogs, who swallow more water and also lick the residue off their fur, the exposure can be deadly. Every summer dogs die after swimming in toxic algae, but many pet lovers don't even realize it's a danger.

On Thursday, state water officials specifically issued a no-swimming advisory for Silverwood Lake due to a toxic bloom of cyanobacteria. The lake, located near Crestline in the San Bernardino Mountains, has been closed to all water activities, including swimming, fishing, and boating, while officials try to treat the problem.

It is the fourth closure of a California public recreational lake this summer because of the algae.

According to the state Department of Water Resources, sunlight, warm temperatures, certain nutrients in the water, and calm conditions can contribute to blooms.

If any lake or pond has a green soupy look or visible algae coating the surface or shoreline, it is best to keep yourself and your pets out.

Algae are some of the oldest microorganisms on the planet. Not all species produce dangerous toxins, but cyanobacteria grow thicker and faster when lake levels are low, temperatures are high and water is stagnant. Nitrogen or phosphorous provide nutrients for the bacteria to feed on and grow, and both are plentiful in agricultural runoff or sewerage.

While there are no confirmed human deaths from cyanotoxins in the U.S., there are documented fatalities in other countries. In 1966, 60 dialysis patients died in Brazil after being exposed to toxins in the water supply.

Cyanobacteria are microscopic bacteria found in freshwater lakes, streams, ponds and brackish water ecosystems. They can produce toxins that affect people, livestock and pets that swim in and drink from the contaminated water.

Blue-green algae grow and colonize to form "blooms" that give the water a blue-green or greenish color. It may also looks like blue or green paint spilled on the surface of the water. Because the algae float, they may be blown into thick, concentrated mats near the shore, making them easily accessible to livestock, pets and people.

Algal concentrations are most abundant during periods of hot weather in mid- to late-summer months and are most likely to be found in nutrient-rich water, such as near agricultural run-off areas.

Most blue-green algae blooms do not produce toxins, but it is not possible to determine the presence of toxins without testing, so all blooms should be considered potentially toxic. Very small exposures, such a few mouthfuls of algae-contaminated water, may result in fatal poisoning for many animals.

People might experience rashes, irritation of the nose, throat or eyes, headaches, gastrointestinal upset and diarrhea.

For dogs, clinical signs of poisoning are dependent on which algae toxin is involved. Microcystins can result in liver damage or failure. Signs of liver injury include vomiting, diarrhea, blood in stool or black, tarry stool, weakness, pale mucous membranes, jaundice, seizures, disorientation, coma, and shock. Death generally follows within days as a result of liver failure. 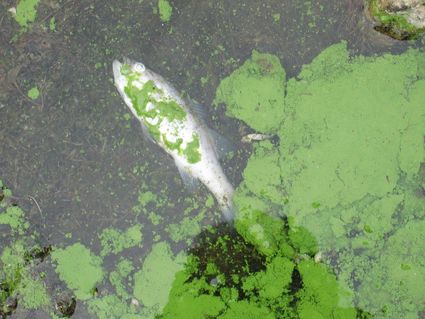 The blooms can lead to fish die-offs as they deplete the oxygen in the water.

Anatoxins result in neurotoxicity evidenced by excessive secretions (e.g., salivation, lacrimation, etc.), neurologic signs (including muscle tremors, muscle rigidity, paralysis, etc.), blue discoloration of the skin and mucous membranes, and difficulty breathing. Death follows within minutes to hours of exposure as a result of respiratory paralysis. Livestock that graze around affected ponds or lakes and are able to drink from them are often found dead near the water source.

If you suspect an animal has been exposed to blue-green algae, see your veterinarian immediately.