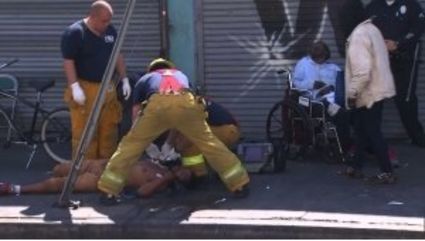 Los Angeles firefighters treat one of 18 patients assessed in Skid Row on Aug. 22, 2016.

For the second time in just four days, firefighters responded to a group of overdose victims in Skid Row on Monday, August 22.

Fourteen were transported to hospitals.

Just last Friday, firefighters responded to s similar situation a few blocks away. Eighteen victims were also treated in that incident, where the presumed overdose was attributed to "spice."

Spice is another name for a synthetic marijuana that has become increasingly available on the street of Los Angeles. The product can have wide variability in both potency and effects.

Monday's patients seemed to have similar symptoms, leading health care professionals to believe that there is an unusually potent batch of the drug currently available.

Many of the patients had altered mental states, and some had seizures.

Summer heat or underlying medical conditions can exacerbate the effects of the drug, creating emergency situations.

In other incidents this summer, the users have become combative or wandered in and out of traffic.

Use of the drug seems to be prevalent and increasing among the homeless population of the Skid Row area, causing an impact on the EMS and Fire Department resources, as well as using services at community hospitals.

The drug reportedly sells on the street for about $1 a joint, and does not show up on drug screens for those in treatment programs.

Because of its unpredictable nature, spice can be very dangerous or even deadly for those who choose to smoke it.

Synthetic cannabinoids are designer drugs that are chemically different from the chemicals in cannabis but which are sold with claims that they give the effects of cannabis. When these chemicals are sprayed or otherwise soaked into a base material which is often plant-based, then the plant with chemicals is sometimes misleadingly called synthetic marijuana. These products are sold for recreational drug use

There are several psychoactive artificial cannabinoid families (e.g. AM-xxx, HU-xxx, JWH-xxx, CP xx) that are sold under brand names like K2 and spice, both of which are now used as generic terms used for any synthetic cannabinoid product. 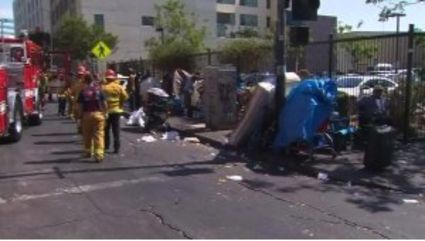 Firefighters respond to a multipatient incident attributed to spice use in Skid Row on Aug. 22, 2016.

They are often marketed as herbal incense or "herbal smoking blends", and the products are usually consumed through smoking. Although synthetic cannabinoids may not produce positive results in drug tests for cannabis, it is possible to detect their metabolites in human urine. The synthetic cannabinoids contained in these products have been made illegal in many countries.